Difference between revisions of "Ethiopia" 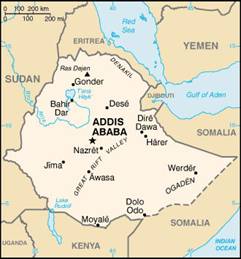 Located in eastern Africa, Ethiopia has an area of 426,371 square miles (1,104,300 sq. km.) and an estimated population in 2012 of 84,320,987. The people subscribe to Christianity, introduced in A.D. 335; Islam, begun in the 6th century; and traditional (animist) religions. Evangelicals began to evangelize in the 17th century but did not prosper until the 20th century. According to the 2007 national census, Christians make up 62.8% of the country’s population, with 45.3% belonging to the Ethiopian Orthodox Church and 19.3% belonging to other Christian churches; 33.9% of Ethiopians are Muslim, 2.6% practice traditional faiths, and 0.6% belonging to other religious groups, including a small group of Jews. The country has been independent except for the five-year domination by Italy in the early 1940s; consequently the people do not hold bitterness toward colonial powers as in some other parts of Africa.

Much of Ethiopia is a high plateau with a pleasant year-round climate. Early rains come in April; the heavy rains begin in July and last through September. The northeast is desert-like lowlands reaching from the inland mountains to the Red Sea. Here nomadic tribes live. In the mountains and deep river valleys people farm for a living, grow their grain and vegetables and raise cattle. Coffee and hides are important exports.

In 1974 a Soviet-backed Marxist-Leninist military government succeeded a monarchy of many centuries duration. During the 1980s the country was devastated by wide-scale droughts and resulting famines, leaving approximately 1 million people dead. In 1991 the Marxist-Leninist government was removed and a new constitution was adopted in 1994, resulting in free elections in 1995.

Mennonites first went to Ethiopia in 1945 as relief workers sponsored by the Mennonite Relief Committee of Mennonite Board of Missions (MC). Samuel Yoder and Paul Hooley made initial contacts and found the country to be in need of medical and educational work because the Italian occupation left the country bereft of an educated class. Even so the government was reluctant to admit foreign missionaries. As a result, the Mennonites tried to prove themselves as people of service and not as intruders in the nation's politics nor as proselytizers of Orthodox Christians.

Mennonites contracted with the government to renovate a cotton gin into a hospital at Nazareth, a town of 30,000 located at an elevation of 5,000 ft., 60 mi. (97 km.) southeast of Addis Ababa. By 1947 renovation was complete for a 40-bed hospital, a training school for medical assistants (dressers), and an outpatient clinic. The place was named Haile Mariam Mamo Memorial Hospital in honor of a statesman killed during the war with Italy.

In December 1947 Daniel and Blanche Sensenig of the Lancaster Mennonite Conference arrived in Ethiopia, sent by the Eastern Mennonite Board of Missions and Charities. Their goal was to obtain permission to begin an evangelical mission service. In 1948 Emperor Haile Selassie I invited Mennonites to function as a mission and do educational and medical work among Muslims in Hararge Province. This was the start of the Ethiopia Mennonite Mission. A hospital and the first elementary school were built at Deder in Hararge Province, a school and clinic were opened at Bedeno, and an evening school was established in Dire Dawa. A School for the Blind, directed by Clayton and Martha Keener, was opened in Addis Ababa in 1952. In 1959 a Bible Academy was opened at Nazareth. A staff of 30 missionaries—doctors, nurses, teachers, pastors—were appointed by Eastern Board to maintain these institutions. Congregations were formed around these institutions. When the Meserete Kristos Church (MKC) was organized in 1959 there were 400 attending worship services in five locations: Deder, Bedeno, Dire Dawa, Addis Ababa, and Nazareth.

The church experienced slow but steady growth throughout the 1960s and early 1970s. In 1974, a Soviet backed military junta (the Derg) overthrew Emperor Haile Selassie and established a one-party communist state. By 1982 the government had closed all 14 Meserete Kristos Church congregations and the 5,000 church members began meeting secretly in cell groups. When the communist government fell in 1991, there were 53 Meserete Kristos Church congregations with 34,000 members. The MKC has experienced tremendous growth and in 2012 was the largest Anabaptist/Mennonite denomination in the world with 225,159 baptized members.

Between 1990 and 2020 the following Anabaptist groups were active in Ethiopia: