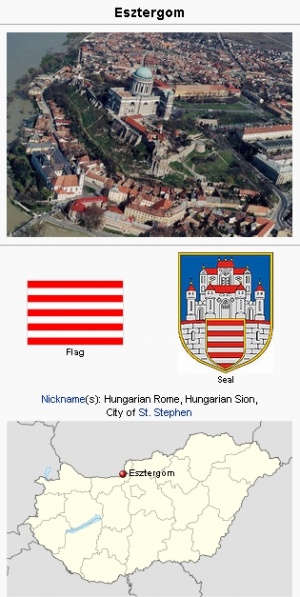 Esztergom (German, Gran), a city (population of 22,000 in 1950; 30,523 in 2008) on the Danube in Hungary, 25 miles northwest of Budapest (coordinates: 47° 47′ 58″ N, 18° 44′ 27″ E), seat of the Catholic archbishop and primate of Hungary. In the library of the primate many valuable codices (manuscript books) of Hutterite origin are kept, once confiscated from the Brethren. When around 1757 the last great persecution of the Anabaptists (Hutterites) set in under the Empress Maria Theresa, which eventually ended in a complete liquidation of the brotherhoods in Slovakia and with their forced conversion to Catholicism (see Habaner), government orders were issued that all of their handwritten books and their (non-Catholic) Bibles were to be confiscated and handed over to the ecclesiastical authorities (mostly to the Jesuits). Such large-scale confiscations of books (raids) took place in 1757-63, and again in 1782-84. Joseph Beck collected all of the relevant material (orders, reports, etc.) from Hungarian and Slovakian archives and published it in the appendix of his Geschichts-Bücher, pp. 578-634. From these excerpts we also learn that many books were successfully hidden by the Brethren before the coming of the officers. On the other hand a good number of books were not preserved but were simply burned as “heresy” by some parish priests (Archiv f. Reformations-Geschichte).

Some 30 codices were kept in the former Jesuit College of Bratislava (Pressburg), now the library of the chapter of the Canons of the Cathedral. Another set of 27 codices was sent to the primate in Esztergom, where these books are still well preserved in the primatial library. Ten more codices came somehow into the library of the University of Budapest, and many more were scattered in various libraries. All in all much more than 100 such codices must have been taken away. The hidden ones came to light almost a century later, and a few even found their way back to the Brethren in America.

The Hutterite collection in Esztergom comprises 5 chronicles (Denkbüchel, Geschichtsbüchel), 3 epistle books, 5 hymnbooks (Liederbüchel), 12 codices with religious tracts and ordinances, and 2 more books with miscellaneous contents. The chronicles usually run from the beginnings (around 1525) up to 1620, 1668, and even 1694; the epistle books were written in 1574, 1581, and 1601; the hymnals originated in 1637, 1650, etc. Among the 12 codices with a varied content is found a beautiful copy of Riedemann’s Rechenschaft  in a small-sized codex of 1614; Andreas Ehrenpreis’s great Sendbrief of 1652 (very likely the original ms., Cod. No. Ill, 137); then three codices with the great “Article Book” of 1602, 1655, and 1679; and one codex (No. III, 198) with the famous Gemeindeordnungen (regulations and ordinances) by Ehrenpreis, around 1640. Other codices contain most carefully written epistles (from Jakob Hutter up to Andreas Ehrenpreis), a variety of doctrinal tracts, Bible concordances, catechisms, and an “Apocalipsis” (written 1593), and the apocryphal “Testament of the Twelve Patriarchs.” One codex contains nothing but the writings of Sebastian Franck (written 1597), and one codex of 1657, called Weinbüchel, instructs “how to treat wine when spoiled.”

All of these books are beautifully bound in embossed leather, often showing the year and ownership, and locked by brass clasps. They average 300 leaves (some have up to 600), most are octavo size, and are carefully written (occasionally in black and red) on heavy paper. In the introduction to his Geschichts-Bücher (XXIII-XXXIII) Beck lists in detail all the codices he used, briefly summarizing their contents. However, the library of Esztergom has many more such books than are listed by Beck, and a complete catalog is still needed. Transcripts of almost all this material are kept in the provincial archives of Brno, Czechoslovakia, known as the “Beck Collection” (see Beck, Joseph von).