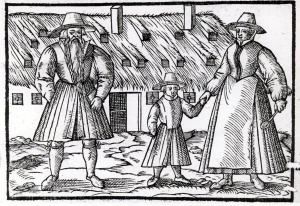 Christoph Erhard was an Austrian Catholic theologian of the second half of the 16th century, aggressive champion of the Counter Reformation, and polemical writer against the Hutterites. Around 1582-83 Adam von Dietrichstein called him to Nikolsburg, Moravia, as parish priest with the special assignment to promote the recatholization of this noble estate and by all means to suppress the Anabaptist “heresy” of that area. For the next six years he worked vigorously in this direction, after which he was called to Salzburg to become a counselor of the archbishop. While in Nikolsburg he naturally came into closest contact also with the Hutterites. Since they resisted his attempts toward conversion to Catholicism, he had nothing but contempt for them, pouring his vitriolic invectives against them into his books. It is these books which attract our interest to this otherwise not very important man.

Four titles have become known: (1) Zwelff wichtige und starcke Ursachen Hansen Jedelshausers von Ulm seines Handwercks ein Nadler, Warumb er mit seinem ehelichen Weib und vier Kindern von den Widertaußern, so man Hutterische Brüder nennt, sey abgetretten (Ingolstadt, 1587; allegedly Erhard was only the editor of this small pamphlet and wrote the preface); (2) Gründliche kurtz verfaste Historia von Münsterischen Widertauffern: und wie die Hutterischen Brüder so auch billich Widertauffer genent werden (Munich, 1589. The title page has an interesting woodcut showing a Hutterite house with a Hutterite man, woman, and child in front. Copy in Goshen College Library); (3) Catholische Brief(e) und Sendschreiben, darinnen vermeldet wie es eine Beschaffenheit um das Religionswesen in der Herrschaft Nikolsburg in Mähren, sampt angedrucktem Gespräch (Ingolstadt, 1586); (4) Salus ex inimicis. Goliaths Schwerdt. Augenscheinliche Erweysung, was wir Catholische unnd alte Christen für klare unnd kräfftige Argumenta und Zeugnussen haben. . . . Mit angehängten Ursachen, warumb all jetzt schwebende Sectierer und Ketzer, als da seynd Zwinglianer . . . und Widertauffer, ihrer Communion halben, von den Catholischen gestraffet werden (Ingolstadt, 1586, copy in the [[Amsterdam Mennonite Library (Bibliotheek en Archief van de Vereenigde Doopsgezinde Gemeente te Amsterdam)|Amsterdam Mennonite Library]]). Of these only the second-named book is of any significance for Anabaptist studies. The first book, claiming to be a genuine recantation and confession of a former Anabaptist who had turned Catholic, hardly deserves more than passing mention. It abounds in stark lies in order to bring the Hutterites into disrepute (for instance, it is claimed that Jakob Hutter was executed for adultery). The Gründliche Kurz Verfasste Historia of 1589, a book of about 130 pages, is more important as a polemical pamphlet, as one learns from it some of the material which the opponents used to incite hatred against the Brethren. It is a very poor performance in this regard, and outdoes in untruth the first-named pamphlet. There is no vice which “after the example of the Münsterites” could not also be found with the Hutterites. They have the same goal as the Münsterites and commit the same horrible deeds. They are drunkards and brawlers, thieves and adulterers; they are arrogant and puffed up, even insolent. Hutter is an ignorant ass, a robber and rebel, etc. The Chronicle he calls a book of lies. He also quotes the “new song” of Johann Eysvogel of Cologne (1583), in which the fraud of the Anabaptists is “unmasked.” The book ends with a warning against these “miserable confused heretics.” The third book (1586) is more or less a boasting about Erhard’s great achievements in Nikolsburg, formerly a stronghold of heretics and now again Catholic. It is a eulogy of the Dietrichsteins who have promoted this new movement of the Roman Church. Actually he had little reason to boast about his work. It was not until 1619-22 that the Hutterites had to leave the place and the Counter Reformation could record a full victory. The polemics of Erhard, however, were soon taken up by another Catholic priest, the bellicose Christoph A. Fischer of the same area, whose attacks were much more subtle and matter-of-fact than those of the Gründliche Historia. But all these pamphlets brought about much hardship for the Brethren, hard pressed and slandered as they were already.

These pamphlets were used as source materials by V. A. Winter, for his historical work, Geschichte der bayrischen Wiedertäufer im 16. Jahrhundert. Munich, 1809, as he notes on page 126.