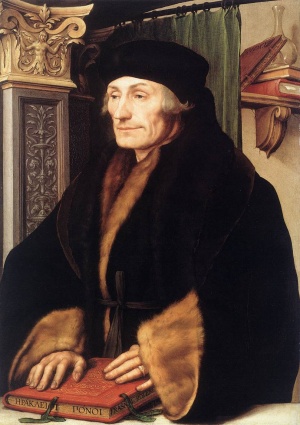 Desiderius Erasmus, born 1466 at Rotterdam, Holland, died 1536 at Basel, Switzerland, known as Erasmus of Rotterdam, the greatest humanist of the 16th century, was the son of a priest, Rogerius Gerardus. Erasmus attended the public school at Gouda, and continued his education at Deventer. In 1487 he became an Augustinian canon in the monastery of St. Gregory’s at Steyn. He was ordained to the priesthood in 1495. He was released from the intolerable restrictions of monastic life by Henri Bergen, bishop of Cambrai, who made him his secretary, and aided him in his further studies and travels. In the succeeding years he found a number of generous patrons. In 1500 appeared the first edition of his Adagia, a collection of short sayings with witty interpretations. He lived in a number of different countries, but was apparently happiest in England. Here, in the home of Sir Thomas More, he wrote his Encomium Moriae (In Praise of Folly) (1509), which was translated into many languages. He was involved in disputes with many scholars in Europe on various aspects of intellectual and academic liberty as opposed to the stereotyped practice of the day. He remained Catholic, though his sympathies were at least equally on the Protestant side. He wrote a vast amount; the most significant of his works were his theological studies and commentaries.

The services rendered by Erasmus for the Reformation are very great, (1) In his work to improve the scholarly editions of the Greek and Latin New Testament he laid the foundation for the Bible translations of the Reformation. (2) His merciless mockery of stupidity undermined for a large part of the laity the authority of the clergy. It was due to his idea that I John 5:7 (the text on the Trinity) was spurious, that this verse was omitted from the older Anabaptist translations and was enclosed in parentheses in the later Biestkens Bible.

Furthermore, F. Pijper has demonstrated that the great difference between the Lutheran Reformation and the early Dutch Reformation was due to the influence of the writings of Erasmus on the Dutch clergy. This fact is sufficient to understand that the Dutch Anabaptists were deeply influenced by Erasmus, an influence that is evident in two respects: (1) The large number of citations from Erasmus found in the works of Menno Simons, shows his thorough acquaintance with the works of Erasmus. This is also true of the writings of Adam Pastor and Dirk Philips, who may have been somewhat influenced by him. (2) The Dutch Anabaptists of the 16th century were in the great majority of cases believers in the freedom of the will as defended by Erasmus against Martin Luther.

It is not very likely that the Dutch Anabaptists derived their principle of nonresistance from the treatise on war by Erasmus, entitled Dulce Bellum inexpertis, of 1525, for Erasmus’ ideas are more humanistic and negative, those of the Anabaptists more Biblical and positive. Besides, the Dutch translation of the treatise from the original Latin did not appear before 1560. -- Karel Vos, Nanne van der Zijpp

German Anabaptism also shows no small degree of influence by Erasmus, especially among the leaders on the Lower Rhine. Campanus and Thomas von Imbroich often quote him in their writings and speak of him in terms of great appreciation. On baptism and communion, the Trinity, and freedom of the will Erasmus offered so much that was in accord with Anabaptist teaching, that he was suspected not only of promoting their cause, but even of being one of them (Rembert, 26). In designating the Bible as the sole source of Christian truth, in promoting the use of the Bible in the vernacular, in stressing that “Christianity is essentially a life of discipleship of Christ,” he expressed common Anabaptist demands. His Enchiridion militis christiani (1502), “a fine devotional book of the educated world,” in which he promoted a Christianity interpreted by the Sermon on the Mount, was read in Anabaptist circles, especially after it was available in a Dutch translation (about 1550). The extent of Erasmus’ influence on Hans Denck is still to be investigated. Some personal contact while they were both living in Basel can be assumed. But their agreement on points of doctrine is probably caused by the common source of their concepts, viz., German Mysticism. Erasmus’ Dulce bellum inexpertis (War Is Sweet to Those Who Have Not Experienced It) of 1525 and other pamphlets in which he showed the evils and the misery of war and satirized those who glorified warfare may also have influenced the Anabaptists and Mennonites to strengthen their peace principles. Harold S. Bender has discussed Erasmus as a possible source for the pacifism of the early Swiss Brethren, particularly Conrad Grebel in Zürich, in his Grebel biography (201 ff.) but concludes that the Erasmian pacifism was humanitarian whereas that of Grebel and his associates was Biblical. He says, “Between the opportunism of an Erasmus who would be willing to let a ruler decide whether a war was just or not, and the absolutism of a Grebel who would dare to say that ‘among believing Christians killing is done away with altogether’ there is a world of difference. It is unthinkable that Grebel derived his deep conviction on this point from his humanist background.”

Erasmus’ judgment of Anabaptism is worthy of note. Though he sharply rejects and condemns their consistency, he also notes their pious conduct which sets them apart. They are to be commended above others for the blamelessness of their lives (Rembert, 566). In 1534 he also wrote to Guido Morillon, “The Anabaptists have flooded the Low Countries just as the frogs and locusts flooded Egypt, a mad generation, doomed to die. They slipped in under the appearance of piety, but their end will be public robbery. And what is like a miracle, although they teach absurdities, not to say impossibilities, and although they spread unlovely things, the populace is attracted as if by a fateful mood or rather the impulse of an evil spirit in this sect” (Erasmus, Op. III, 1186). In their spirit of sacrifice unto death and their faithfulness to conviction the Anabaptists far surpassed the learned but vacillating scholar. Walther Köhler said significantly: “The Anabaptists were closer to Erasmus than to Luther, but they popularized and hence spiritualized him” (Flugschriften II, No. 3).

The degree of influence of humanism upon the early Anabaptists or even the very rise of Anabaptism and its theology is still debated. Recently Köhler and others have pressed strongly their belief that Anabaptism owes much to humanism, and particularly to Erasmus. At the same time Köhler stresses, and rightly so, their essential Biblicism, and it is evident that many Anabaptists came directly out of Lutheran and Zwinglian circles. In Zürich the first Anabaptists were all Zwinglians, not Erasmians. The difficulty in answering the question is due in part to the variation among those outwardly belonging to the movement in the earlier days. If one makes the very necessary discrimination between spiritualists and Anabaptists and assigns such as Denk and Campanus to the fringes rather than to the heart of Anabaptism, the answer becomes easier; the Anabaptists were far more Biblical-evangelical than humanistic. Nevertheless the question is not yet fully cleared up; the final answer is still to be given and awaits a more thorough study of Anabaptist theology. -- Christian Neff, Harold S. Bender

Smith, Preserved. Erasmus: A Study of His Life, Ideals, and Place in History. New York and London, 1923.