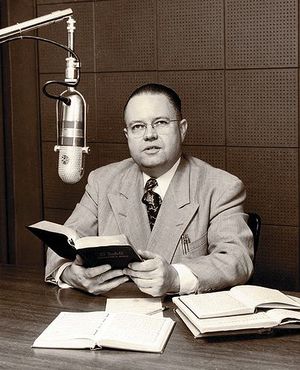 Theodore was baptized on 20 May 1923, at First Mennonite Church, Newton, Kansas, the congregation his grandfather Johann Epp (1835-1922) from West Prussia and Am Trakt Colony, Russia had pastored. It was this congregation that had sponsored his parents' work in Arizona. Theodore Epp was converted at Flagstaff, Arizona, on 10 August 1927 under the teaching of Norman B. Harrison.

Epp married Matilda in 1930 and was ordained at her home church (Zoar Mennonite Church, Goltry, Oklahoma, USA), where he pastored, 1932-1936. He was educated at Hesston College and the Bible Institute of Los Angeles (now Biola University). He received a ThM degree from Southwestern Baptist Seminary, Fort Worth, Texas in 1932. His thesis topic was: "Should God's People Partake in War?" In 1936 Epp joined the radio ministry of T. Myron Webb and, on 1 May 1939 launched the Back to the Bible Broadcast at Lincoln, Nebraska. At the time of his death this program was aired on 800 stations. His funeral was held at the Rosemont Alliance Church of Lincoln, Nebraska, where he and his family attended, but never became members.

Epp, Theodore H.  Forty-Five Years of Adventuring by Faith. Lincoln, NE: Back to the Bible, 1984.