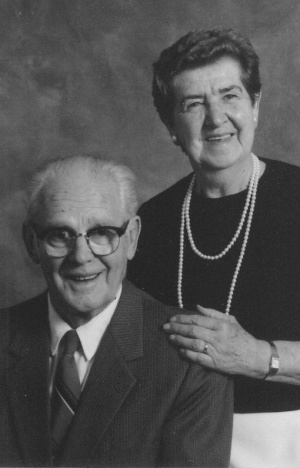 Peter Abram Epp: community leader and missionary; born 21 February 1915 on the Blumenheim Estate, near Alexandrovsk, Ukraine, to Abraham and Aganetha Dirksen Epp. He was one of four children and had three half-siblings and several step-siblings. In 1939 Peter married Helen Tiessen in the Essex County United Mennonite Church in Leamington. Peter died unexpectedly in Leamington in 1995 on his way home from an historical program which he had planned and directed.

Peter's family was able to finance their journey from Ukraine to Whitewater, Manitoba, Canada in May of 1925. During the winters of 1936-37 and 1937-38, Peter attended the Winkler (Peniel) Bible School.

Helena Tiessen: born 14 July 1916 in the Molotschna Colony, Ukraine to Gerhard and Agatha Tiessen Tiessen. She had six brothers and six sisters. The Tiessens were rescued from starvation by the American MCC soup kitchen in 1921. Helen remembered Orie Miller's visit to Halbstadt, Molotschna in Ukraine. The Tiessen family arrived in Waterloo, Ontario, Canada in July of 1924. They moved to Kingsville in 1925 and later to Point Pelee where Helen finished elementary school, and later worked in the apple orchards and fields.

Peter's interest in Mennonite history and archival preservation was evident already prior to their marriage when Peter had Helen promise that she would faithfully save all issues of Die Mennonitische Rundshau and Der Bote, among other Mennonite publications. The couple share-cropped on several farms before buying a small farm on Road 5 in 1946. In 1947 they became the first houseparents at the United Mennonite Educational Institute. Here they were custodians, cooks, fundraisers and "ersatz" parents for approximately 30 dormitory students

In 1951 Peter and Helena Epp left Leamington to become houseparents in the MCC Mennoheim (Menno Home) in Ascuncion, Paraguay. Here they distributed material aid, arranged activities for young people, including 20-25 Pax boys, and cooked and cared for 60 or more people who lived there. In 1954 the Epp's were called to Montevideo, Uruguay. This assignment was highlighted by the arrival of their two children: Mary, a teenager, and ten day old Robert. After a one year furlough in Canada, they returned for a four-year second term in Ascuncion, Paraguay. When the Epp family returned to Canada, they purchased a farm on Highway 77 of Leamington, Ontario. In 1966, Peter Epp became administrator at the Leamington United Mennonite Home, and Helen took over the kitchen and care duties, positions they held for 14 years.

In 1982 Peter and Helen put together a planning group for the Leamington area MCC thrift shop, and later that year, the Et Cetera Shoppe opened its doors with Peter as board chair. During this time, regular Essex-Kent Mennonite Historical Association meetings were held in the Epp's Danforth Street home in Leamington. A short time later, the Epp's moved their trove of historical material out of their basement into a condominium in the newly built Garden Apartments on Pickwick Drive of Leamington. This condo became the Mennonite Heritage Centre where Peter and Helen oversaw virtually every program related to the association and became the enthusiastic force behind its operation. In the early 1990s Peter and Helen transferred their church membership from the North Leamington United Mennonite Church on Road 6 to the Leamington United Mennonite Church on Oak St.of Leamington.

After Peter's death Helen continued to be a gentle, yet strong pillar in the community. She remained active in the Et Cetera Shoppe, on the EKMHA Board of Directors where she was an honourary life member, in the Peter A. Epp Room (named in Peter's honour) located in the Heritage Centre, and in the Leamington Mennonite Home until her sudden death in 2001.