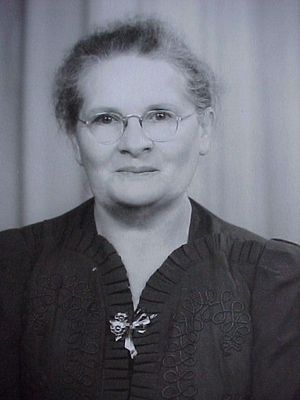 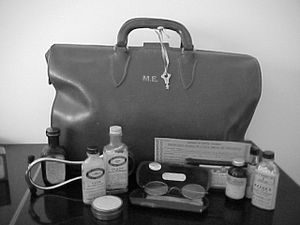 Margaretha Klippenstein’s family moved from Alexanderwohl to Logovsk, Neu-Samara, in 1891. There Margaretha was educated and baptized into the Mennonite Brethren Church. It was in the Logovsk church that she met Heinrich Enns. Shortly after their marriage, the couple moved to the burgeoning Mennonite settlement of Slavgorod, where they homesteaded in the village of Petrovka/Lichtfelde. Margaretha bore eight children here, one of whom died young. During the First World War, Heinrich served in forestry camps as an alternative to military service. Margaretha, a strong and confident young woman, managed the farm in his absence.

In 1923 Margaretha and her family moved to Blumenort, Slavgorod Mennonite Settlement, where she began studying midwifery. She had for some time felt a strong passion for serving as a midwife, and Heinrich somewhat reluctantly approved. After her studies concluded in Riga, Latvia, Margaretha worked as a midwife for two years, some of that time being spent under the direction of the well-known Dr. Erich Tavonius in the Muntau Hospital in Molotschna. The state of political affairs in Russia was worsening, however, and the Enns family immigrated to Canada in 1926, settling in Zeneta, Saskatchewan. In this isolated village, Margaretha worked as midwife and medical care provider, and gave birth to another son.

Life in the warmer climate of British Columbia was calling the Ennses and in 1929 the family moved to Yarrow, where they immediately purchased a farm. Margaretha gained a reputation as a trusted midwife in Yarrow, even acting as a medical assistant, giving injections, and providing medication to patients in the absence of their medical practitioners. Her career as a midwife was somewhat disruptive to family routine; when Margaretha was called to assist at a birth, children were quickly lodged with the Enns’ neighbours. Both Heinrich and Margaretha were long-time deacons in the Yarrow Mennonite Brethren Church.

In that career which was such a major component of her life, Margaretha Klippenstein Enns was rather exceptional among Mennonite women of her era. Her husband, Heinrich, was supportive of her choices, but it was her own self-assurance that was critical to her working career.

Family documents are stored in the archives of Mennonite Historical Society of BC, Abbotsford.