From GAMEO
Revision as of 13:31, 7 April 2020 by SamSteiner (talk | contribs)
(diff) ← Older revision | Latest revision (diff) | Newer revision → (diff)
Jump to navigation Jump to search
A checked version of this page, approved on 7 April 2020, was based on this revision. 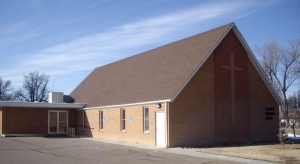 Emmanuel Mennonite Church, located in La Junta in the Arkansas Valley of southeastern Colorado, began as the Spanish Mennonite Church. In cooperation with the Mennonite Board of Missions and Charities, the East Holbrook and La Junta Mennonite churches established a Sunday school for Spanish-speaking people who worked in the sugar beet fields in the Cheraw area (approximately 10 miles (16 km) north of La Junta) during the early 1920s. This work, which was the first Mennonite outreach to Hispanics in the region, was begun through the efforts of William Nunemaker, who was appointed superintendent of the Mexican Mission work in Cheraw during the fall of 1922. On 11 March 1923, Nunemaker took charge and organized the Cheraw Spanish Sunday School. The first meeting of this Sunday school was held on 5 April 1925, in the Cheraw Hall. With the help of the two churches, he superintended the Spanish Sunday School work until 1939.

In late 1939 the two churches invited David and Elsie Shank Castillo to conduct special meetings with a small group of field laborers living in Cheraw. David, a native of Monterey, Mexico, and Elsie Shank had been married 25 July 1938 in the home of Sanford C. Yoder, president of Goshen College. They had been providing pastoral leadership for a Mennonite Mexican Mission in Chicago. At the time little evangelistic work was underway among Hispanics in the area with the exception of the Sunday school, a Spanish Baptist mission in Rocky Ford, and a small Spanish Baptist Mission in La Junta that was without pastoral leadership. After returning to Chicago, the Castillos received a letter from the Mennonite Board of Missions informing them that the East Holbrook and La Junta Mennonite churches wanted them to conduct an outreach effort among the Arkansas Valley’s Spanish-speaking people.

In August 1940 the Castillos moved from Chicago to Cheraw to administer the Mennonite Spanish mission work. During this period, however, many of the Hispanic families in Cheraw started moving away to take advantage of employment opportunities elsewhere. Thus, the Cheraw work was closed, and in October the Castillos began holding worship services and Sunday School in the former Baptist Spanish Mission building at Fifth and Harriet Streets in La Junta that had been turned over to the Mennonites by the Baptist mission board.

Members of the La Junta and East Holbrook churches quickly rehabilitated and remodeled the building which had been constructed in 1921 and began transporting the remaining Hispanics at Cheraw to the La Junta mission. With the aid of persons from both churches – Isaac Culp, Magnar Hjelmstad, Matilda Gage, Scott Jones, Eugene Schulz, Eldo Miller, among others—as well as staff members and nurses at the La Junta Mennonite sanitarium and hospital, the Castillos soon initiated a full array of Spanish Sunday and weekday church services and youth and children’s club activities.

From its beginnings this mission effort, at first variously known as the Mexican Mission or La Junta Spanish Mission but ultimately as the La Junta Spanish Mennonite Church, was financed by the La Junta and East Holbrook congregations along with the Mennonite Board of Missions. The congregation was organized in February 1941 when 11 persons were baptized and six were received upon confession of faith. David Castillo was ordained as the congregation’s minister at the La Junta Mennonite Church on 23 February 1941, with Bishops Milo Kauffman and Allen H. Erb officiating. By 1943 the church had a membership of 25. In 1944, with the help of the Arkansas Valley churches, Castillo commenced a half-hour Spanish Gospel radio broadcast on Sundays on local La Junta radio station KOKO in addition to conducting services in Las Animas, some 20 miles to the east. Although the Las Animas outreach effort would be discontinued after one year, Castillo initiated outreach efforts in other towns in the surrounding area, including Rocky Ford. After the Columbian Elementary School in La Junta was destroyed by fire in 1945, the local school board accepted the Castillos’ offer to use the Spanish Mennonite Church for classes while a new school was constructed. This opening presented Castillo with the opportunity to talk to the school board about its policy of segregating Hispanic and Anglo students during their first six years of schooling. When the New Columbian School was opened in the fall of 1946, the school board acquiesced to Castillo’s request that all classes be integrated. After 1959 Castillo was assisted by Eldo and Bertha Miller, who had served in Mennonite mission outreach under the South Central Mennonite Conference in the Mexican border area of Mathis, Texas, during 1948-1951.

The La Junta Spanish Mennonite Church, which became a charter member of the Rocky Mountain Mennonite Conference in 1961, continued to prosper, its membership growing to 42 in 1955 and 52 by 1962. In that year the church building was condemned by the city. With financial help from Colorado Mennonite churches, the Rocky Mountain Mennonite Conference and the Mennonite Board of Missions, some town businessmen and friends, and various fundraising efforts led by Castillo, the church started a building fund, and on 2 September 1962, a groundbreaking service was held for a new church building.

Demolition of the old church structure began the next day. While construction was underway, the congregation met in the city of La Junta’s school board headquarters on Santa Fe Avenue. Upon its completion the new building was dedicated in February 1963, and the congregation adopted a new name—Emmanuel Mennonite Church.

David Castillo continued to pastor the church with the assistance of Eldo Miller. After the strenuous construction effort, Castillo suffered an attack of gout and was later diagnosed as having pernicious anemia. After conversing with his congregation, Castillo in late 1963 sent a letter to the La Junta Mennonite Church—then considering construction of a new building on its property at 8th Street and Santa Fe Avenue—requesting that its members join the Emmanuel congregation in worship and outreach with a view toward eventual merger. In his letter Castillo stated that most of the young people in his congregation understood English better than Spanish, and thus he requested help from those who were fluent in English. Castillo also felt that it was an appropriate time for his congregation to transition to an English-speaking pastor, while he devoted his time to the older Spanish-speaking people.

During late 1963 the La Junta and Emmanuel congregations studied the possibilities of a plan for united worship and service. When Castillo observed that his call for integration was dividing the La Junta congregation, he attempted to drop the idea, but E.M. Yost, Rocky Mountain Mennonite Conference Overseer, continued to support the merger. For several months in late 1963 and early 1964 the two congregations conducted joint worship services during which Spanish and English hymns were sung and Castillo and Paul H. Martin, pastor of the La Junta congregation, provided sermons in Spanish and English, respectively. However, misunderstandings soon developed, and on 23 February 1964, Martin resigned as pastor of the La Junta Mennonite Church to become co-pastor of, and assume major responsibility for, the Emmanuel congregation with assistance from Castillo who would soon retire. More than half of the members of the La Junta congregation responded to the merger discussions and transferred their membership to Emmanuel. Martin remained at Emmanuel as pastor until late 1966, after which Wallace (Wally) Jantz, former pastor of the Perryton Mennonite Church, was installed on 8 January 1967.

Jantz served as Emmanuel’s pastor until 1977. After a one-year interim pastorate by Stan Friesen (1978-79), Stan Smucker began serving as its pastor in July 1980 and served in that position until late July 1989. When the La Junta Mennonite Church closed in September 1984, many of its remaining members transferred their membership to the Emmanuel church. During Smucker’s three-month sabbatical during the summer of 1987, Frank Peachy, an AMBS student, served as pastoral intern. In 1988 Marlene Smucker, Stan’s wife, was elected as the conference’s moderator-elect, thus becoming the first female moderator of a Mennonite church conference. After Vernon Lohrentz served as the congregation’s interim pastor, Merritt Welty was licensed and installed as the congregation’s pastor in September 1990. Meredith Schroeer was interim pastor from November 2000 until July 2001 when the congregation called Steven Schmidt to be their pastor. He served until June 2009.

In 2007 Emmanuel Mennonite Church, under the pastoral leadership of Steve Schmidt, had an average attendance of 70.  In 2011 Jeremy Yoder served as the congregation’s pastor, and the church had a listed membership of 90.

Unrau, Harlan D. In Pursuit of Land, Health and Mission: A History of Mennonites in the Mountain States Region.  Printed in Canada by Blitzprint Inc., 2007.