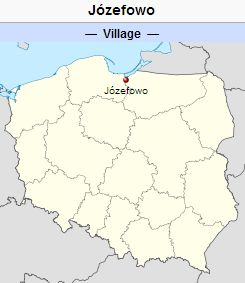 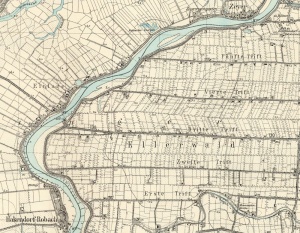 During the period of the rule of the Teutonic Knights, the area between the Nogat River and the city of Elbing was covered by marshes, brush, and forest. After the Jagiellonian Channel (Kanał Jagielloński) was constructed in 1483, linking the Elbląg and Nogat rivers, the land was slowly drained and converted into meadows. The development of the meadows began in 1563 when four causeways were built. The land was divided into 435 parcels of land, representing each of the tenement houses in Elbing, and owned by the citizens of Elbing. In order to develop the area, the parcels of land were leased out to Mennonites that had been expelled from the city of Elbing shortly after 1550, along with Mennonites that had been expelled from Ducal Prussia in 1559. In a short period of time, the Mennonites established new villages, including Ellerwald 5.Trift. The land was divided into long strips (Triften), separated by drainage canals. By 1772, Mennonites held approximately 3,500 acres (1,416 hectares) of land in the Ellerwald area.

Until 1772 Ellerwald 5.Trift was located in what was known as Royal Prussia (also known as Polish Prussia) in the Kingdom of Poland. The First Partition of Poland in 1772 resulted in the creation of a new province in 1773, called West Prussia, in which Ellerwald 5.Trift was located. Ellerwald 5.Trift was situated in the district (Kreis) of Elbing until the end of World War I, when it came under the jurisdiction of the German province of East Prussia. At that time the Ellerwald area was inhabited by 736 Mennonites. The village came under the control of Nazi Germany during World War II until February 1945, when it was occupied by Soviet forces and returned to Poland. In 2012 it was a village in the administrative district of Gmina Elbląg, within Elbląg County, Warmian-Masurian Voivodeship.

The Prussian census of 1776 lists eight Mennonite families in Ellerwald 5.Trift with the following surnames: Barg, Hiebert, Kieler, Loewen, Penner, von Bergen, Wieb, and Wiens. In 1820, Ellerwald 5.Trift had 230 inhabitants, of which 20 were Mennonite.

Mennonites who were residents of Ellerwald 5.Trift were members of the Elbing-Ellerwald Mennonite Church.