Among the early Ohio Mennonites who joined the Yellow Creek congregation were two preachers, Jacob Wisler, age 39, and Jacob Christophel, age 66. On Ascension Day, 1 June 1848 these two preachers, along with bishop Martin Hoover, conducted the first services for the Yellow Creek congregation. Since at this time there was no meetinghouse, the services were held in a local school house. Preacher Wisler delivered the main message, with an opening given by preacher Christophel. Testimony affirming the two messages was offered by bishop Hoover. During this first church service there was no singing because no one present felt capable of starting a song.

Within almost a 20-year period, the Indiana Mennonite Conference expanded into six congregations under the conservative leadership of bishop Martin Hoover and then his successor, bishop Jacob Wisler. Mennonite custom and tradition were closely adhered to, thus creating unity among the conference members while the "worldly" virus of Protestant pietism was kept outside the walls of the Mennonite culture.

In 1867 John F. Funk moved to Elkhart County, Indiana and, with him came the strain of the Protestant pietism virus which would eventually infect most of the Indiana Conference Mennonites. By 1869, Funk had forced bishop Jacob Wisler's withdrawal from the Indiana Mennonite Conference. In 1871, Jacob Wisler, along with about a 100 like-minded Mennonites, agreed to retain and promote the Old Mennonite church customs. It was this action that formed the Old Order Indiana Mennonites, who would soon be known as the Wisler Mennonites. 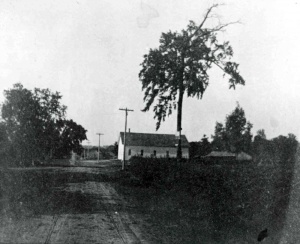 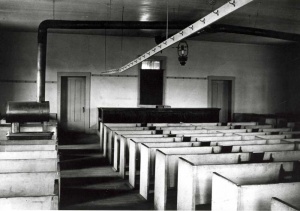 After the 1871-1872 division, the Yellow Creek Mennonite meetinghouse was used on alternating Sundays by the Indiana Conference Mennonites and the Wisler Old Order Mennonites until 1912.

During their 1972 spring conference, the Lancaster County Groffdale Old Order Mennonite Conference accepted the proposed merger. Since that time, the two groups have achieved a unity of oneness. Nevertheless, in 1981, bishop William G. Weaver withdrew from the Indiana Groffdale Conference church (known as the John W. Martin church until the 1972 merger) over the use of pneumatic tires on skid-steer loaders. To fill the office vacated by bishop Weaver, Elvin M. Martin was ordained as the new bishop. Beginning in 1983, the members of the former John W. Martin church began to strongly avoid and to discourage the use of the name “John W. Martin people.” They preferred to be known as the Indiana Groffdale Conference people.

Blossers meetinghouse was a wood frame building built in 1891 along County Road 46. Its measurements were 42 feet by 54 feet.