From GAMEO
Revision as of 11:05, 24 February 2021 by SamSteiner (talk | contribs) (corrected table)
(diff) ← Older revision | Latest revision (diff) | Newer revision → (diff)
Jump to navigation Jump to search
A checked version of this page, approved on 24 February 2021, was based on this revision. 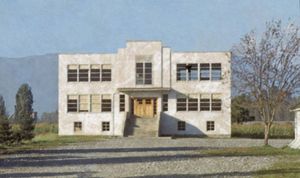 The first of many Bible schools that Mennonites birthed in British Columbia was established in Yarrow, the first permanent Mennonite settlement in the province. The initiator of Elim Bible School (meaning springs of living water), as the institution in Yarrow became known in 1936-1937, was Gerhard J. Dersken (1879-1960) whose zeal for Bible training had been kindled when he resided briefly in Winkler, Manitoba after coming from Russia and had seen the Winkler Bible School in operation. A Bible school education, Derksen felt, would counteract the spirit of materialism already taking root among young people. By October 1930, a year after its founding, the Yarrow Mennonite Brethren (MB) Church established a Bible School Society consisting of 22 members, and shortly thereafter engaged Peter D. Loewen as the first instructor. 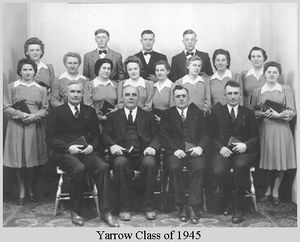 In November 1930 Elim began a twelve-week program of evening instruction with 26 students in attendance. Courses taught included Theology, Mennonite History, Sunday School Methodology and German. Owing to the large enrollment, John A. Harder, pastor of the Yarrow MB Church, was soon added to the teaching staff. A day-school program introduced in 1930, continued until 1933 when financial pressures brought on by the depression forced a two-year closure of the school even though staff salaries had amounted to little more than $20.00 per month.

By 1935 the church was again able to support its Bible training program. A new school was erected and Abram Nachtigal appointed instructor. Now the course of studies was expanded to a five-year program, including certification of students with the Evangelical Teacher Training Association in the 1940-1941 year. With Cornelius C. Peters as principal, Elim experienced its record enrollment in the 1941-1942 school year with 152 students and five full time instructors. At the same time the curriculum was expanded to include Homiletics, Christian Ethics and Psychology. The character of the school was shaped to a large extent by Cornelius C. Peters, Gerhard H. Sukkau, Herman Lenzmann, and later by Henry Warkentin, who all served the school for longer periods.

The destruction of the building by fire on 16 November 1945 was a severe test for the school. Undaunted, the church immediately undertook to replace its loss with a new and much enlarged structure, completed by September 1946. Nevertheless, the economic reverses visited upon the community as a result of the collapsing raspberry industry in the post-war years, did not bode well for the future of the Bible school. By 1948 the enrollment dropped to 29 students. Although Elim continued to struggle for several more years, it was forced to cease operations in 1956. In its history the school graduated 115 students and supplied a harvest of workers for local church and outreach ministries.