From GAMEO
Revision as of 23:47, 21 June 2016 by RichardThiessen (talk | contribs) (Added categories.)
(diff) ← Older revision | Latest revision (diff) | Newer revision → (diff)
Jump to navigation Jump to search
A checked version of this page, approved on 21 June 2016, was based on this revision. 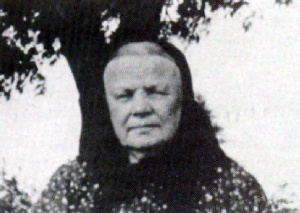 Helena Klassen Eidse: Mennonite nurse and midwife; born on 18 December 1861 in the village of Margenau, Mototschna Mennonite Settlement, South Russia. She was one of 14 children, of which 5 died in infancy, born to David Klassen (1813-1900) and Aganetha (Brandt) Klassen (1816-1904). Helena was baptized on 31 January 1879 by Peter Toews and that same year married Abraham E. Eidse (1857-1930) on 6 April 1879. Together they had eight children--only four survived to adulthood. Helena died on 5 November 1938 in Rosenhof, Manitoba, Canada.

In 1866 Helena's father sold their farm in Margenau and moved to Heuboden in the Borozenko Mennonite Settlement, South Russia. This is where many members of the Kleine Gemeinde had made a group purchase of land in 1865. In 1873 the Borozenko settlement began to discuss relocation as a result of military and education reforms in Russia. Helena's father, David Klassen, was one of 12 delegates sent to North America to look for a suitable place to relocate the colony. The following year, 1874, Helena and her family immigrated to Canada. They spent the first winter in Winnipeg where they acquired two cows. They sold and delivered the milk to customers and it was through these sales that Helena learned English. In the spring her family moved to Rosenhof, Manitoba where her father became the first mayor or "Schultz". Helena was baptized in 1879 and that same year married Abraham E. Eidse. Abraham was elected as deacon in 1882 and ordained as a minister in 1884.

Helena Klassen Eidse began her career in nursing at the young age of 13 working as translator for the local doctor, Robert McTavish. Finding out that she could speak English, he took her with him when working among the Mennonites. Helena was an intelligent and energetic young woman who soon learned the basics of nursing and midwifery under Dr. McTavish's instruction. They worked together for 35 years and then Helena continued to serve the community on her own until her death on 5 November 1938. Over the years Helena delivered hundreds of babies, the last one on 23 August 1938 just shortly before she died. In addition to acting as midwife, Helena also set broken bones, performed basic first aid, served as community chiropractor, and served as undertaker. She died at the age of 76 after a life time of dedicated service to her community.