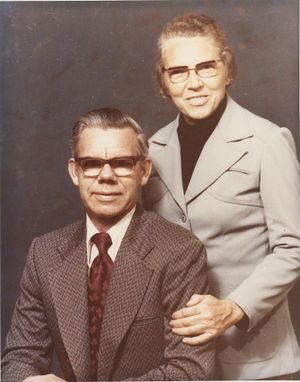 Ben and Helen Eidse taken in the 1980s.
Photo: Courtesy of the family. 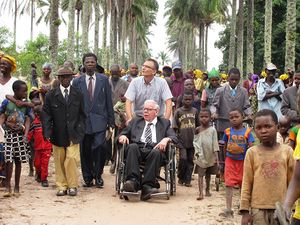 Ben returned to Kamayala in 2010 to memorialize Helen, surrounded by pastors, teachers and choir members.
Photo courtesy of the family.

Ben F. Eidse grew up on a wheat farm in the Rosenort area of Manitoba. Ben learned to love languages with parents that spoke German and Low German. He committed his life to Christ and was baptized in 1944. He attended the Steinbach Bible Academy and graduated from it’s successor, the Steinbach Bible Institute, in 1950. It was at a Missions Conference at the Academy during the 1940s that Ben first sensed a call to foreign missions. His preparation for this calling continued as he went to Pelly, Saskatchewan, in 1949, under the Western Gospel Mission. Ben served the Ukrainian settlers by leading Bible classes in homes. He also preached and played his guitar at a nearby First Nations reservation, honing skills in linguistics and personal relationship building that would be an asset for him throughout the rest of his life.

In 1953 Ben and Helen Eidse were the first missionaries sent out by the newly formed Evangelical Mennonite Conference (EMC) Board of Missions. They went to Belgium Congo under the auspices of the Congo Inland Mission, which later became the Africa Inter-Mennonite Mission (AIMM). Helen had graduated from nurses’ training shortly before their marriage. With the Lunda-Chokwe of the Congo, they built a medical-church-education centre and learned the local heart language. During the next thirty years, the Eidse’s were either in the Congo or studying, reporting and preaching in North American during their furloughs.

Ben Eidse earned a BA from Goshen College in 1959, followed by an MA from Wheaton Graduate School.

In 1961 during tribal conflicts, Ben returned alone to Congo for five months. Refugees flooded in from Angola, and Ben delivered food relief and other services. The Eidse family returned to Congo in 1963, shortly before the 1964 Simba revolution. While Helen and their four girls stayed in Kinshasa during the worst period, Ben filled his van with students, driving through front lines to bring them to safety. In the following years, after the revolution, Ben developed a very effective Bible memorization program. It is reported that entire villages were changed through this program. The Catholic mission also borrowed these Bible lessons that he had developed.

In 1969 Ben Eidse was selected by the American Bible Society to translate the Bible into modern, dynamic Chokwe. Together with another pastor and folklorist, this work was completed in 1982. This translation team also was asked to write a lesson book on the Christian disciple’s response to sorcery, the fear and temptation to use it to harm others. This work was done and then translated and adapted for several major tribal areas.

In 1983 Ben Eidse was appointed president of Steinbach Bible Institute, later named Steinbach Bible College (SBC). During his tenure as president, 1983-1992, he led the institution to full accreditation status with the Accrediting Association of Bible Colleges (AABC). In 1992 he was granted a sabbatical and was accepted to the University of Edinburgh, where he completed his doctoral classes at New College. He was considered a rare individual among western students of the Lunda-Chokwe language and culture. His research captured oral history in print, tracing the blended tribes’ origin stories and values with respectful insight. His research hypothesis was that a cultural relevant biblical discipleship can deal effectively with the fear of sorcery and the temptation to use it to harm others. He compared western ideas of magic, myth and medicine and traditional Lunda-Chokwe concepts of interconnectedness with biblically-based, Anabaptist concepts of community and reconciliation.

In 1995 Ben Eidse was named SBC’s first chancellor. In this role he provided advice and councel to the president, strenthening relationship within the college and with its constituency and supporters.

Helen and Ben Eidse received a Lifetime Service Award from the Association of Anabaptist-Mennonite Missiologists. Their story was compiled and published in Light the World (Friesen Press, 2012). Ben’s thesis research was also published as The Disciple and Sorcery: The Lunda-Chokwe View (Cambridge Scholars Publishing, Inc., July 2015).

At the time of Ben Eidse’s death in 2018, one long-time employee at the SBC summarized his life as follows: “Ben Eidse is remembered for his exemplary life, his positive attitude and optimism, his steadfast belief in the power of prayer, his enthusiasm as a teacher and the keen interest he took in each student, his inexhaustible energy, and his open door policy – always taking time to listen and to give a word of encouragement and prayer.”

Eidse, Ben. Light the world: the Ben and Helen Eidse story / as told to Faith Eidse. Victoria, BC: Friesen Press, 2012.