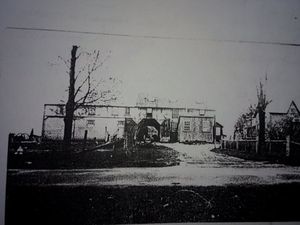 John R. Ebersol: Old Order Amish inventor, businessman and church lay leader; born in Lancaster County, Pennsylvania, USA on 16 February 1874 to David Ebersol (22 September 1839–9 March 1887) and Esther Riehl (20 August 1846-21 November 1920). On 7 February 1895 John married Laura Miller (29 February 1876-3 March 1904); they had three children: Aaron, Daniel and Esther. John’s second wife was Magdalena (Mattie) Schmidt (11 February 1873-1 August 1952) from Millbank, Ontario, Canada. In a pre-nuptial agreement, Mattie agreed to marry John and move to Lancaster, Pennsylvania with the understanding that if she didn’t like living in the USA, they would move back to her home community two years later. They were married 18 March 1906 in the Mornington Amish Mennonite meetinghouse and moved to Lancaster. They moved back to Ontario in March 1908. John Ebersol died 26 September 1950. Both John and Mattie are buried in the Edgecombe Amish Cemetery, Newton, Ontario.

As a young man John operated two threshing rigs in the Lancaster community and became concerned about the dangers and inefficiencies associated with hand feeding threshing machines. Sheaves were thrown onto a stand in front of the cylinder of the threshing machine and a man was required to cut the bands and then, with both hands, feed the grain into the cylinder--a dangerous and unpleasant job. John built a prototype of a self-feeder in Lancaster County in 1908, just before he moved to Ontario. Because the grain harvest came earlier in Lancaster than Ontario, John’s prototype was attached to his brother David’s threshing machine and tested in the summer of 1908. The thresher was then shipped to John in Ontario who made the necessary adaptations.

In 1909 John bought three acres of land at 98 Mill Street East in Milverton, Ontario, near to the Grand Truck Railway tracks. Here he built a two-story shop and began producing self-feeders for threshing machines. The Amish ministers in Lancaster strongly opposed his intent to secure a US patent for his invention. So, on 15 August 1908 he applied for a Canadian patent for his self-feeder and a year later was issued Patent No. 120262. Ebersol Self-Feeders grew in popularity and were soon shipped all over the USA, Canada, Central and South America and Russia.

Although the vast majority of his Amish contemporaries were farmers, John was an inventor and businessman. Nonetheless, he remained committed to the Amish church all his life.

Through his experience in business, John acquired skills which set him apart from his peers in the Amish community. He was fluent in English, an able letter writer and comfortable dealing with broader society. When Canada entered World War I, the Old Order Amish ministers appointed him to "help our young Brethren in the interest of their souls about Militarism." John accompanied young Amishmen to the tribunals which ruled on their applications for exemption from military service. On behalf of the Old Order Amish congregations John reached out to Mennonite Bishop S. F. Coffman of Vineland, Ontario, for advice and help. His first letter addressed Coffman as a "brother to a good extent of our faith." Ebersol lamented "that the Mennonites and Amish Mennonites are so very much split up" and his correspondence with Coffman, which extended into a discussion of postwar reconstruction efforts, seems to have worked towards diminishing that split and paving the way for the more organized and united Mennonite response during World War II.

For 25 years the Ebersol Manufacturing Company prospered and John expanded into other farm equipment. About 1930 John passed his business to his son, Aaron. By 1933 the company employed 12 workers. Like his father, Aaron had a creative and mechanical mind. He improved the grain harvesting process by designing a straw shredder which attached to the rear of the threshing machine. He received a patent for his invention in 1941. Under Aaron’s management, the Ebersol Manufacturing Company expanded its product lines so that by 1954 they were manufacturing 12 large items. One advertisement claimed that the Ebersol Farm Equipment Co. Manufacturers sold "Ebersol special feeders, straw shredders, feed mixers, hay and straw shredding units, grain throwers, hay and straw throwers, grapple hay forks and general repairing."

As the Ebersol Manufacturing Company grew, Aaron saw the need to accept public electricity and a telephone. To avoid the censure of his church, he took on two non-Amish partners whom, it was said, owned the electricity and the telephone. Nonetheless, tensions between those who resisted newer technology and those, like the Ebersol family, who welcomed newer technology finally resulted in a division in the Mornington Old Order Amish congregation. Along with the Ebersols, a number of families formed the Steckley Old Order Amish District in 1945. Over the next 40 years the Steckley District accepted tractors, electricity, telephones and cars. Discontent with this latter innovation, Aaron’s son, John K. Ebersol, took his family back into the Mornington Old Order Amish Church about 1976.

With the invention of the Ebersol Self-Feeder, John R. Ebersol significantly improved the safety and efficiency of the threshing process. His business acumen and ability to communicate served his community well during World War I when his church appointed him as the advocate for young men seeking exemption from military service. In this role, he also served as the Old Order Amish correspondent and liaison with military officials and other Amish and Mennonite leaders who advocated for conscientious objectors in Canada.

Gingerich, Orland. The Amish of Canada. Waterloo, ON: Conrad Press, 1972.