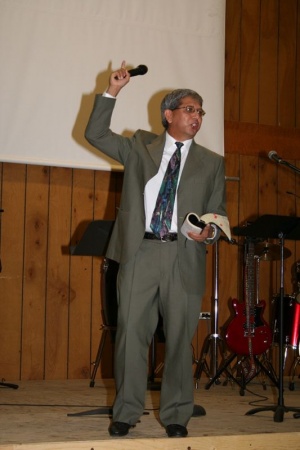 Ebenezer Christian Church (Iglesia Cristiana Ebenezer), a member of the Evangelical Mennonite Conference (EMC), began its services in Brandon, Manitoba in 2002 as part of a vision to minister to Hispanic people working at the nearby Maple Leaf Foods hog processing plant.

In 2010 it was estimated that about 5,000 Hispanic people were part of Brandon (pop. 43,000). The work began as an outreach of the Spanish ministry within Braeside Evangelical Mennonite Church in Winnipeg, Manitoba. Ebenezer’s first pastor was Antonio Pitta, who himself came from Mexico to work and was discipled.

In December 2004 the congregation was approved for affiliation by the EMC council, and in July 2005 it was received into EMC membership. In November 2008 Ebenezer was officially organized as an EMC church.

In 2008 Antonio Pitta moved to Calgary, Alberta to plant another church. Hernan and Landis Benitez came to serve as its pastoral couple.

In 2010, the service attendance was 70 to 80 and congregants came from Colombia, El Salvador, Paraguay, Mexico, Honduras, and Canada.  Subsequently, it suffered a church split, with Hernàn Benitez continuing to serve as pastor of Ebenezer.

In 2012, Ebenezer Christian Church had an average Sunday School attendance of 20 and a worship service attendance of 90. The service was in Spanish.

In early 2013 Ebenezer Christian Church was meeting in a former Baptist building at 1037 Lorne Avenue in Brandon. It had purchased, and was renovating a property elsewhere on Lorne Avenue.