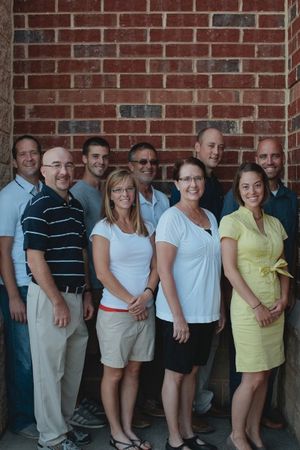 The vision for Eastside Church (Mennonite Church USA) in Harrisonburg, Virginia began in 2009 with Peter Eberly, then serving as the youth minister at Harrisonburg Mennonite Church. After reading statistics that 70% of Mennonite church members were over the age of 45, Eberly experienced a clear vision that God had placed on his heart. Given the large number of college students in Harrisonburg, Eberly concluded: "We weren’t going to remain in a community where the majority of the population is under 45, where the majority of the population in our churches is over 55, and be happy with that." Virginia Mennonite Missions provided encouragement, training and coaching that moved this vision ahead.

In June 2009, Eberly invited a former Eastern Mennonite Seminary colleague, Matt Schwartz, to join him as an associate pastor of discipleship. Schwartz committed to five years of church planting ministry with Eberly. Along with their wives, Natalie Eberly and Mindy Schwartz, the pastors discerned the location, mission, and vision for the church plant. They agreed on the east side of Harrisonburg, with its significant commercial and residential growth due to the new development of real estate. They also created a four-fold mission statement: seeking Christ, teaching others, serving the community together, and joining in worship.

By the end of the calendar year, a critical mass had committed itself to the initiative as the Eastside Church launch team. Twenty-three adults began meeting regularly in small groups, praying and planning for the start of a new church plant. This launch team selected Skyline Middle School, a newly constructed public middle school, as its meeting location. The team held pre-launch services as trial runs in this space on 24 January, 21 February, and 7 March 2010. On 14 March 2010, 96 people attended the opening worship service of Eastside Church. Eberly and Schwartz introduced their first sermon series, which ran through June 2010, entitled "A Church for this Generation."

From the beginning, Eastside Church sought to make itself hospitable to young adults. While this goal was not expressly stated in the mission, catering to a young population was integral to the vision. College students came en masse, particularly from James Madison University, first in dozens and later by the hundreds. When year one attendance peaked at 165 on 27 February 2011, about 100 of those were likely college students.

Eastside Church’s local community-focused mission quickly emerged as a distinctive feature attracting new attendees. Eberly communicated a vision from the book of Jeremiah, which had been integral to his calling to plant a church. In its early stages, Eastside Church made a radical decision to set aside half of its Sunday morning offerings for mission endeavors outside of its immediate congregation. These funds financed local mission projects such as biweekly groceries for Skyline Middle School families, a community Christmas party, local Young Life ministries, and young adult summer service assignments, as well as established mission organizations such as Virginia Mennonite Missions and Mennonite Central Committee.

After a fruitful first year, Eastside proved to be a sustainable church plant that grew into a robust congregation. The congregation offered a faith community for college students and other young adults and families. Some of these participants were engaged in discipleship through small groups, men’s and women’s Bible studies, and one-on-one mentoring relationships, which Schwartz cultivated as the discipleship pastor. In February 2011, Eastside Church officially joined Virginia Mennonite Conference, consonant with Eastside’s Anabaptist commitments and desire for accountability.

In August 2011, Eastside executed a major community outreach endeavor, the "Back to School Bash," a free Christian concert that brought Eastside significant publicity and became an annual event. As students returned to school that fall, Eastside’s attendance skyrocketed from 80 to 185. The congregation eventually discerned that while the 50% mission giving was not sustainable, it was still a priority and remained at the core of the financial mission.

In 2013 Eastside increased pastoral compensation to full-time status for both Eberly and Schwartz. The weekly attendance in 2013 exceeded 400.