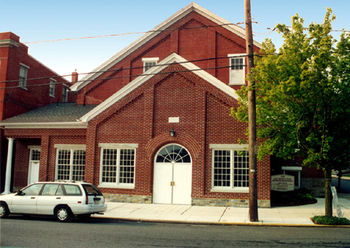 The East Chestnut Street Mennonite Church was established in 1879 after rural Mennonites in Lancaster County, Pennsylvania, USA, began to find employment in Lancaster City. During the 1870s, some of these Mennonites asked rural ministers to come into the city to hold worship services. These were initially held on Sunday afternoons.

In 1879 the Lancaster Mennonite Church was built at its present location on land donated by lawyer Christian H. LeFevre. The building was dedicated on 4 January 1880; the initial membership was about 40. The congregation erected a new building in 1906; at that time, the name changed to East Chestnut Street Mennonite Church. This building remained in use in 2021. In 2002 the front of the building was renovated with a foyer, an elevator, and other accommodations to make the building more accessible.

A Sunday school began in 1894 with Benjamin F. Herr and David Lantz as superintendents.

In 1934 Paul Mosemann began delivering 15-minute radio sermons in violation of a Lancaster Mennonite Conference regulation. This violation led to his excommunication. Paul and his brother, Daniel, then organized the Calvary Independent Church.

In 1952 a split in the congregation resulted in the formation of the Neffsville Mennonite Church which joined the Ohio and Eastern Mennonite Conference. That group desired a less authoritarian conference and more congregational freedom.

Indeed, by the 1950s, East Chestnut was considered a progressive Mennonite church within the Lancaster Conference. It had a balcony, Sunday school rooms, and carpeted floors; additionally, worship services included special music, couples sitting together instead of separated into men's side and women's side, prayer without kneeling, and young peoples' meetings. Fewer women wore cape dresses at East Chestnut than was the case in the rural congregations.

The East Chestnut Street Mennonite Church (Mennonite Church), a member of the Lancaster Mennonite Conference, is located at East Chestnut and Sherman Streets, Lancaster, Pennsylvania. The first meetinghouse was built on this site in 1879, services having previously been held in a rented building on Charlotte Street. This meetinghouse was replaced in 1906 by a larger brick church. The trustees of the first meetinghouse, members of adjoining country churches, took their turns in caring for the afternoon services. A Sunday school was opened in 1894 with Benjamin F. Herr and David Lantz as superintendents. On 11 December 1904, John H. Mosemann was ordained to the ministry, and in 1926 to the office of bishop. On 30 June 1907, David H. Mosemann was ordained to the ministry. For years the church has been a young people's center every second Sunday night. Numerous all-day meetings were also held here. The ministers in 1955 were Noah G. Good, Jacob E. Brubaker, and Mylin Shenk. Services were held twice each Sunday, with a Sunday school, a summer Bible school, and a weekday Bible school each fall.

The congregation has been directly or indirectly the mother of a number of mission congregations in and near the city of Lancaster, among them being Vine Street, North End, Rossmere, South Christian Street, Laurel, and Freemont Streets, Lyndon. It has also suffered many losses by withdrawals. A considerable number of the Calvary Bible Church (independent) came from East Chestnut Street, while a block of members leaving in 1952 organized the Neffsville Mennonite Church under the Ohio and Eastern Conference. Earlier a number had left to share in the organization of the Monterey Mennonite Church under the same conference, near Bird-in-Hand, Pennsylvania. As a result of these vicissitudes, the congregation has declined severely in membership (1955, 200).