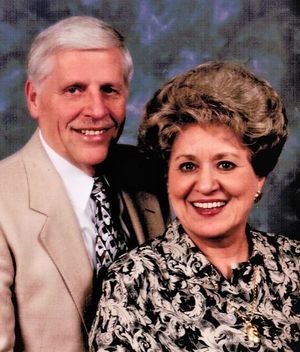 John B. and Edith Dyck.

The Benjamin M. Dyck family survived the Great Depression in Saskatchewan by diversifying from grain only farming to cattle, poultry and swine. In 1946 the family moved to Abbotsford, British Columbia and settled on a stump farm which was then cleared for berry farming. John was raised in a Christian home, accepting Christ as his Saviour in his youth and he was baptized on 6 September 1953, becoming a member of Abbotsford Mennonite Brethren Church (now known as Central Heights Church).

Growing up in tough times John was determined to succeed in life and make sure that his future family would never have to go through what he did. At a very young age he took on any job available, even venturing out to Vancouver to support himself and pay for school expenses, including Grades 8, 9 and 10 at the Mennonite Educational Institute in Abbotsford. John met his future wife, Edith, in Vernon, BC while taking Grade 11 in nearby Lumby. He later returned to Abbotsford for Grade 12. After graduation John got an accounting job with the Canadian National Railway in Vancouver and dated Edith in Vernon for over four years before they married in 1957. They moved to Vancouver, where John and Edith became charter members of Killarney Park Mennonite Brethren Church. In 1969 the Dycks began attending Willingdon Church in Burnaby, where in 1982 they donated a digital organ to the church.

John’s first company was in the automobile business, Alpine Motors Ltd., an Esso dealership. Then followed Globe Auto Supplies Ltd. where he serviced vehicles of many happy customers. In 1961 John incorporated Parklane Enterprises Ltd. and launched his major entrepreneurial career. Eventually this included building, developing, owning, managing and financing real estate including apartments, condominiums, office buildings, shopping centres, manufactured home parks, warehouses, motels, a campground and a ski resort. In 1970 John incorporated Skyline Investments Ltd. and established his own mortgage/finance business, becoming an investment banker who financed many projects and construction developments. John became a Platinum Member in the Stock Market and was very successful in following world events and determining which investments to undertake and when. He was involved in financing mines in the Yukon, oil wells in Alberta, and even a beaver ranch in Montana. John incorporated many more companies in various fields, and his corporate base continued to grow. In his later years he took particular pride in building two residential complexes, Mountainview Place in Vancouver and The Carmandy in Port Coquitlam.

John had a zest for life, a brilliant mind, great ambition, a seemingly photographic memory, was extremely hardworking, always a "hands on" person no matter what the job entailed, striving to do his best with what the Lord had entrusted to him.

God blessed John in his business ventures and entrusted him with much material success but his selfless and humble spirit was always in the forefront. John and Edith gave to numerous charities including the B.C. Cancer Foundation, the B.C. Children’s Hospital Foundation and the Heart & Stroke Foundation. In the Christian realm they supported Living Truth, Union Gospel Mission, Willingdon Church, Faith to Live By and other ministries. Very generous support was given to Stillwood Camp and Conference Centre near Chilliwack, BC which included the Alder Cottage, the two Carmandy Lodges which together can accommodate 200 people, and the building of the Dyck Dining Hall which can seat 600 guests.

John B. Dyck died on 7 September 2009, succumbing to pancreatic cancer. John left a legacy for his family and also for the thousands who have benefited and continue to benefit from his business enterprises and very generous philanthropic support.