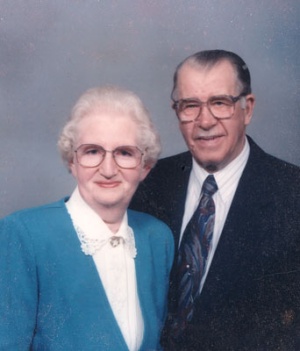 Artur Duerrstein: churchman and farmer; born 27 February 1927 in Trappstadt, Germany, the second son of Robert and Lina (Horsch) Duerrstein. Artur's childhood and youth were spent on a prosperous, large farm and beautiful surroundings near Heidelberg, Germany, where he learned management and farming skills which were later invaluable in his career. He was baptized and joined the Mennonite Church in Trappstadt. Artur died 5 March 2000.

In 1950 Artur made a decision to go overseas to the United States to Hillsboro, Kansas where he attended Tabor College, a Mennonite Brethren Liberal Arts College, as an exchange student. Here he met students who inspired him to return to North America. Soon after, in the Fall of 1951, the family decided to emigrate to Canada, since the Duerrstein farm lay on the demarcation line between East and West Germany.

They arrived in Winnipeg where they attended the South End Mennonite Brethren Church. There Artur met his future wife, Louise Bargen (17 July 1928-20 March 2004). A year later on 8 November 1952 they were married in Winnipeg and moved to St. Agatha, Ontario where they purchased the family farm. Their marriage was blessed with three children, Henry, Irma and Betty and here Artur's long career as a committed Christian businessman began.

Artur and Louise became members of the Kitchener Mennonite Brethren Church where Artur was an active layman. Over 48 years he served for various periods of time as registrar, deacon, trustee and choir member, as well as a member of the church council and the finance committee. Artur was also a many Ontario Mennonite Brethren Conference boards and committees, especially the Tabor Manor Board. In 1980, "he was instrumental in the purchase of Camp Crossroads" by the Ontario conference. It was a beautiful, large new church camp located in Torrance, Ontario. In this pioneer work he exemplified his concern and love for Christian youth. In addition to all this, he was treasurer for the Mennonite Relief Sale in New Hamburg, Ontario for 15 years. Louise contributed to the Mennonite Relief Sale in her own way with her expertise in quilting. Over the years she donated a number of her beautiful, handmade quilts to the quilt auction.

Besides his church work Artur was active in community work. "He worked with troubled boys at Ausable Springs Ranch." He was a Wilmot Township School Board trustee, a member of the Wilfrid Laurier University Board of Governors and vice-chair and interim chair of the Mennonite Savings and Credit Union. As an active farmer he was a member of the Ontario Federation of Agriculture and the Ontario Chicken Producers Marketing Board.

Finally, he was a loving and generous father to both his own family and 16 nieces and nephews, always ready to counsel and celebrate God's goodness. He left behind not only three children and their families with six grandchildren but also a legacy of loving service to God.