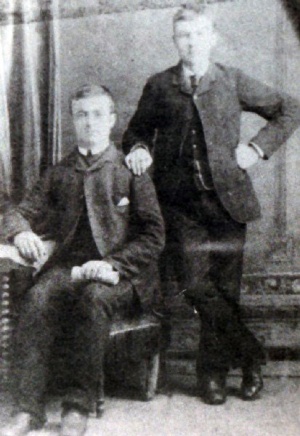 Johann W. Dueck was a Mennonite teacher who also operated the first bookshop in the village of Steinbach, Manitoba, Canada. Johann was born on 12 March 1865 in Gnadenthal but soon moved to Friedensfeld, Molotschna Colony, South Russia where his father Peter L. Dueck (1842-1887) was teacher. When Johann was five, his mother, Justina Wiebe (1844-1870) died of typhus. Johann was one of five children born to Peter and Justina but three of these died in infancy leaving only Johann and his younger brother Peter. The following year Johann's father married Susanna Loewen (1852-1918) and the family moved to Blumenhof which was part of the Borosenko Colony in South Russia. In 1874, as part of the larger Kleine Gemeinde Mennonite migration, Johann's family came to Canada where they first settled in Grünfeld, Manitoba. Johann married Maria Kroeker (1875-1939) on 31 July 1891. Together they had eleven children, six sons and five daughters.

Johann W. Dueck was a man of many talents. His father had opened a bookstore in Grünfeld which Johann took over when he died in 1887. Within the year Johann had moved his bookstore to Steinbach where he operated it out of H. W. Reimer's store. Johann finished elementary school at the age of 14 and then taught himself English. In addition to working his own farm and operating his book shop, Johann also became a school teacher. In total, he taught for 19 years. Two of those years he taught in Neuanlage near Gretna where he attended teacher training school during the 1890's. He then taught in Rosenort and Rosenhof for 17 years. For 29 years Johann served as song leader in his church. He also served the community as an auctioneer. In spite of living a very full life, Johann found time to write extensively about his family, his life and the world he lived in, leaving a valuable legacy for future generations when he died on19 June 1932.