From GAMEO
Revision as of 00:06, 22 August 2021 by RichardThiessen (talk | contribs) (Created article.)
(diff) ← Older revision | Latest revision (diff) | Newer revision → (diff)
Jump to navigation Jump to search
A checked version of this page, approved on 22 August 2021, was based on this revision. 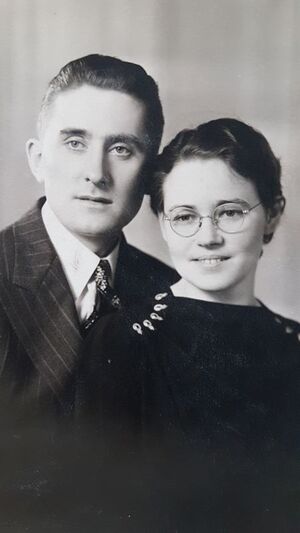 Bill immigrated to Manitoba, Canada with his parents in 1926. He attended Winkler Bible School for two years in his youth. In 1941, he was baptized upon confession of his faith in the Griswold Mennonite Brethren Church in Manitoba, where he was active in the choir.

Between 1941 and 1948, Bill and Susie farmed at Oak Lake, Manitoba; the farm included a beekeeping business. In 1948, Bill and Susie moved to Sardis, British Columbia, where they purchased a dairy and berry farm, but in 1951 they made a mid-life career change. Bill and Susie sold the farm and together established a funeral home business known as Garden Chapel Funeral Homes. The first service conducted in their initial Home was for Bill’s father.

Garden Chapel Funeral Homes grew to include locations in Chilliwack, Clearbrook, and Vancouver. The enterprise was a partnership, with Bill and Susie sharing duties as directors, managers, and morticians until the sale of the business in 1970 to Woodlawn Funeral Homes.

Driediger was also active in the community as a Rotarian, and as a member of the Mennonite Educational Institute Board. He was one of six men who shared the vision of a Mennonite credit union, a vision which became a reality when the group formed Clearbrook District Mennonite Savings Credit Union in 1958; it eventually grew to become Envision Financial.

Following retirement, the Driedigers spent their remaining years traveling and serving their church, Bakerview Mennonite Brethren, in a variety of ways. Bill was very supportive of Columbia Bible College and Mennonite Brethren Missions. On their travels around the world, the Driedigers made visits with mission field workers one of their priorities. Bill enjoyed painting, music, fishing, hunting, carpentry, and some golf.

Bill Driediger will be remembered for his love of life, his curiosity, fearlessness, and confidence in his new adventure as an undertaker. He considered this career a way to help people in their time of grief by responding to them with warmth, kindness and heartfelt sympathy. For Bill, it was not just a job, but an expression of service to God for the community.