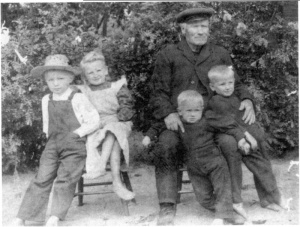 David S. Doerksen grew up in a time of turmoil for the Mennonites in Russia. His ancestors had emigrated from Prussia to Russia in the late eighteenth century and had moved to a thriving community. David married Helena Bueckert in 1867, and the couple settled down and started a family. However, political and social changes in the mid-nineteenth century made life for the Mennonites very difficult. In the 1870s, many of them, including David and Helena, decided to leave for North America. On 20 July 1875, the Doerksens and their three young children arrived in Quebec before continuing on to Manitoba, settling in Schönhorst, east of Grünthal. Helena’s mother and two sisters also settled in the hamlet, while David’s brother and a cousin also lived nearby.

Settling into life in Canada was challenging for David S. Doerksen and his family. Tragedy struck the family in 1879 when two of David’s nephews, sons of his brother Jakob, were drowned while trying to cross the Rat River. In 1890, David’s wife Helena died after a short illness. Meanwhile, David pursued his plans for farming and took out a homestead in May 1880. The farm did fairly well, but David was unable to purchase any more land until 1891, when he finally had the means to do so. That year, he got married for a second time to Katharina Wiebe, a widow who had also been among the immigrants of 1875. She died in 1910. After retiring from farm work, David went to live with his son, Franz, in Grünthal, Manitoba. He enjoyed doing woodwork and spent many hours in his son’s workshop.

Change came again for David S. Doerksen when his son and daughter-in-law decided to move to Paraguay in 1927. Concerned about the Manitoba government’s new laws forcing children to attend public schools and attracted by reports of farming prospects in Paraguay, Franz and his family decided to relocate. After a month-long journey by train and ship via New York and Buenos Aires, the group arrived in Puerto Casado, Paraguay, on 15 November 1927. Trouble came when Franz became ill with a tropical fever following an excursion to inspect some land he intended to buy. Although he recovered, he and his family decided to return to Canada where they hoped life would be somewhat easier. Together with David, the family left Paraguay on 5 October 1928. While on board the ship, David became ill and died at sea.