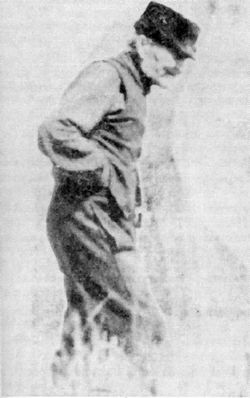 Abraham Doerksen: civic politician and pioneer: born in 1827 in Neu Osterwick, near Nikiloyofsky in southern Russia, to Abraham Doerksen (1805-1871) and Regina (Hoeppner) Doerksen (1806-1831). Abraham was the only child in the family. He married Katharina Friesen in 1851 and Aganetha P. Elias in 1877. Abraham had 12 children, five of whom died young.

Abraham Doerksen’s family had a very unique history. His maternal ancestry was a mystery; his mother, Regina, had been kidnapped by gypsies as an infant and never discovered her real family. She became part of the Hoeppner clan when one of the sons, Peter, rescued her and brought her home to his parents. Regina met and married Abraham Doerksen Sr., only to die three years after her son’s birth. Abraham Sr. then married Helena Schmidt, and the family moved to the Bergthal Colony. Abraham Jr. grew up in Schönthal, where he manufactured farm implements in his own machine shop. The shop did so well that he was able to employ a blacksmith and four carpenters. Abraham was interested in politics, and he became the deputy mayor, or Beisitzer, of the village. In 1851, he married Katharina Friesen, and the couple established a home in Schönthal.

The changes affecting the Bergthal Colony in the 1870s had a profound influence on Abraham Doerksen’s life. As a prominent member of the community, Abraham was a natural choice to represent the colonists as they sought to emigrate from Russia in response to the threatened loss of many of the Mennonites’ privileges. The process of obtaining emigration passes was long and arduous, but Abraham and the colony’s other representatives worked hard to achieve their goal. On 16 July 1874, Abraham, Katharina, and their family began their journey to Canada, with Manitoba as the final destination.

Farming was a central part of the immigrants’ lives, and Abraham bought a homestead next to those of his two married sons, giving the family a large plot of land to farm together. They built their homes close together and called the newly formed small village Schönthal in honor of their hometown in Russia. Other settlers soon joined them, and by 1881, eighteen families lived in the village.

Abraham Doerksen’s situation soon changed. He was left a widower when his wife, Katharina, died only two years after their arrival in Canada. In 1877, however, Abraham married a young widow named Aganetha Wiebe, whose husband had died of typhoid fever. The next year, Abraham’s son, Heinrich, lost his wife to a lightning strike, and next, two of his cousin’s sons drowned. An invasion of grasshoppers in 1875 devastated the crops, and a tornado in 1881 destroyed several of the houses in Schönthal and damaged others. That storm brought an end of the village, as many of the settlers chose to rebuild on their own land. A final blow came in 1884, when a diphtheria epidemic killed three of Abraham’s children and several of his grandchildren. Despite the multiplied tragedies, Abraham and his family maintained their faith in God.

In the midst of all of his troubles, Abraham Doerksen built a life in his new homeland. He never revived the farm implement manufacturing business, but he used his skills to build machines as a service to his neighbors. His farm prospered, and he soon owned a mill, a large piece of land, and a variety of implements. Abraham retired to Niverville and died on 20 September 1916.

Abraham Doerksen’s life was a testament to endurance in the midst of trouble. Despite severe trials, he managed to build a successful life.