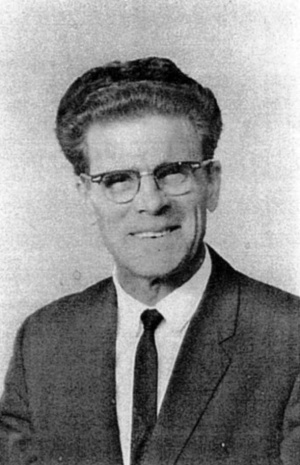 Sylvester Dirks: missionary, pastor, translator, was born 28 April 1916 on his family’s farm near Waldheim, Saskatchewan, to Susanna (Luetke) Dirks (4 March 1889-18 April 1963) and Jacob B. Dirks (22 July 1888-27 February 1968). His Dirks ancestors immigrated to Canada in 1874 from Karolswalde, Volhynia. Sylvester was the third of eight children. In 1929 he and other family members experienced a dramatic conversion. He, along with his mother, older brother and sister were then baptized and joined the Salem Krimmer Mennonite Brethren Church, now known as the Salem Evangelical Bible Church, Waldheim, Saskatchewan. On 31 July 1941 Sylvester Dirks and Matilda (Matty) Epp, daughter of Heinrich M. Epp and Agnetha (Goossen) Epp, married after they both graduated from Bethany Bible Institute, Hepburn, Saskatchewan.  They had three sons and six daughters, one of which died in infancy.  Matilda Dirks was born 10 June 1919 in Ningling, Honan, China, where her parents were missionaries and died on 27 June 1997 in Abbotsford, British Columbia. In 1998 Sylvester remarried the widow Nelly (Dyck) Klassen (7 March 1927-5 October 2002), in their home church, Bakerview Mennonite Brethren. Sylvester Dirks died in Abbotsford on 7 January 2007.

Soon after graduation Sylvester and Matilda Dirks moved to British Columbia where Sylvester taught for one year at Elim Bible School in Yarrow. He then became a missionary in 1942 under the West Coast Children's Mission. In July 1945 Sylvester and Matilda enrolled in a three month linguistics course at Briercrest Bible Institute. In January 1946 with the sponsorship of the Krimmer Mennonite Brethren Conference they began training with the Wycliffe Bible Translators in Mexico. In 1947 they began work as Wycliffe translators and missionaries with the Asháninka, an Original American indigenous people in the east central Amazon jungle of Peru. With linguist Will Kindberg and others, Sylvester, over several years competed the translation of the New Testament into the Asháninka language. In 1948 the Dirks family severed ties with Wycliffe to concentrate on mission work in Peru which they continued until 1967. Their Peruvian mission station was named "El Encuentro" (The Meeting) located at the confluence of the Urubamba and Tambo rivers.

Upon returning to Canada in 1967 Sylvester Dirks pastored the Ebenezer Mennonite Brethren Church, Dalmeny, Saskatchewan, now known as the Dalmeny Community Church for two years. They then moved to Hillsboro, Kansas, where Sylvester finished his Bachelor degree at Tabor College in one year. He then studied one year at the Kansas Teachers College, at Emporia, at the same time pastoring for two years at the rural Friedenstal Mennonite Church, Lehigh, Kansas.   Next the Dirks returned to Saskatoon and Sylvester pastored the Nutana Mennonite Brethren Church from 1971 to 1974. By mid 1974 Sylvester became missions promoter for the Mennonite Brethren Board of Missions and Service. In 1977 Sylvester and Matilda Dirks began a two year term as Mennonite Brethren Conference pastor in Cali, Columbia. In 1980 the Dirkses accepted a Mennonite Brethren church planting assignment in Brooks, Alberta. Here on Pentecost Sunday 1981 they founded a small congregation, the Brooks Mennonite Brethren Church. However, with the Dirks leaving in June 1984 the congregation closed. With the thought of retirement the Dirks moved to Abbotsford, British Columbia in 1984. However, there Sylvester pastored the Arnold Community Church in Abbostford for three years before finally retiring in 1987. In 1992 Sylvester did take a three month assignment with Kingdom Ventures International camping programme in Belorechensk (Белоре́ченск) Russia and Beltz (Бэлць) in Moldova. He returned the following year working with Logos Ministries.

Throughout his life Sylvester was a restless and irrepressible traveler. Apart from their two decades of mission work in Peru, the Dirks family never stayed anywhere long. Even in Peru, Sylvester was constantly on the move and wrote that in his first year in Peru he was traveling away from his family for almost exactly half of its 365 days. His method of travel ranged from river raft to jet. On his travels he never missed an opportunity to share Christ and evangelize fellow travelers.  In personality Sylvester Dirks was warmhearted, vigorous and energetic. He exhibited great curiosity and often visited museums, zoos and historic sites. Sylvester worked in English, German, Spanish, Asháninka and Russian languages. Both Sylvester and Matilda had pioneering spirits and constantly improvised as needed. Sylvester found great joy in meeting other Christians of any denomination anywhere in the world and relentlessly proclaimed Christ’s good news to everyone he met.

In 2004 Sylvester published his highly informative autobiography titled: The days that were ordained for me, (Abbotsford, B.C.).

Dirks, Sylvester. "The days that were ordained for me": the autobiography and memoirs of Sylvester Dirks, pioneer missionary, pastor and Bible teacher. [Privately published by the author], Abbotsford, B.C., 2004, (x),219 pp.