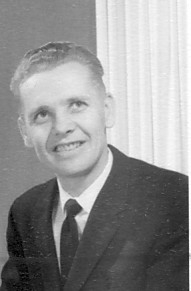 Elmer Dick: pastor, evangelist and church planter; born in Didsbury, Alberta on 12 December 1929 to Abram and Maria (Peters) Dick. He was the oldest of three children.

In the mid-1940s the Dick family moved to Chilliwack, British Columbia, purchasing a farm on Prairie Central Road. Abram at once became active in the ministries of the East Chilliwack Mennonite Church (now Eden Mennonite Church). It was here that Elmer together with his siblings Walter and Mary were baptized. Soon after Elmer was drawn into the youth program, participating in the Jugendverein (Youth Committee).

After high school, Elmer attended the Bethel Bible Institute in Abbotsford, graduating four years later in 1952. The following year he attended the Canadian Mennonite Bible College for the spring semester.

On 26 August 1954 Elmer married Ruth Bergmann. Following their marriage, the Dicks moved to Burns Lake, British Columbia, where Elmer had already been serving in an evangelistic outreach ministry among Low German speaking Old Colony Mennonites, who had first moved to Burns Lake in 1940. Elmer served as pastor and Ruth became an elementary school teacher. Three children were born to Elmer and Ruth in Burns Lake: Marion, Janet and Paul.

Two couples from the East Chilliwack Mennonite Church joined the Dicks in a fledgling church fellowship that had been formed in Burns Lake. In time a thriving congregation became established with numerous conversions and baptisms. In 1959 the group formally organized with 33 charter members and formed the First Mennonite Church. A church building was erected, later enlarged and then moved to a new location owing to the rapid growth of the membership.

Elmer preached in Low German during the early 1950s when the church was founded. There was Saturday German school at the church, a weekly Bible study using a German Bible and Low German for discussion, and English Sunday school. By the time the congregation moved into new quarters on Mulvaney Crescent in 1962, English was the language in use.

The Dicks concluded their ministry in Burns Lake in 1963. A month later Elmer accepted a call to serve as pastor of the Seven Persons Mennonite Mission in the small community of Seven Persons, located near Medicine Hat, Alberta. By 1967 Elmer’s illness (he had been diagnosed with multiple sclerosis) forced him to resign his pastorate; sadly this led in part to the closure of the church.

In July 1968 the Dicks moved to Abbotsford, British Columbia. Soon after Elmer was admitted to the Menno Hospital. His increasing weakness notwithstanding, he became the first chaplain of this facility, and continued this ministry for three years. He died on 8 February 1980, and was buried in the Maclure Road Mennonite Cemetery.