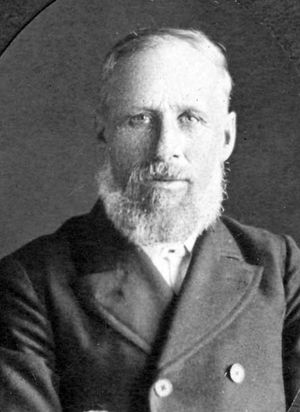 Jacob Bechtel “J. B.” Detwiler (Detweiler) was a pastor of the Mennonite Brethren in Christ (MBiC) Church, church magazine editor, and a presiding elder for the Canada Northwest Conference of the MBiC in Alberta and Saskatchewan.

Jacob Detwiler was born on the family farm west of Roseville, North Dumfries Township in Waterloo County, Ontario, Canada on 6 October 1844 to Rev Enoch R. Detwiler (1818-1874) and Abigail Bechtel Detwiler (1821-1913). He was the first son of 10 children born to his mother, her second child. A brother, Daniel, was among those who pioneered creation of the hydroelectricity system in Ontario. Jacob married Harriet B. Shantz on 18 March 1866. She was born 31 August 1844, a daughter of Jacob Yost Shantz (1822-1909) and his first wife, Barbara Biehn (1819-1853). Harriet and Jacob had no children of their own, but they did adopt two girls.

Harriet Detwiler died 3 December 1908 in Didsbury, Alberta, and was buried in Didsbury Cemetery. On 28 February 1911 Jacob married Margaret A. Williams of Winnipeg, Manitoba, Canada and lived there for more than a year before moving to Berlin (Kitchener) in 1913. When Jacob died on 22 October 1938 he was buried in the Detweiler Mennonite Cemetery west of Roseville beside his parents.

Jacob Detwiler grew up on the family farm in North Dumfries, went to school and then farmed. Later he had his own farm near Bridgeport, Waterloo County, and still later worked at the button and felt factories in Berlin (Kitchener) owned by his father-in-law. J. B. was converted at the age of 24 (1870). He left the Roseville Mennonite Church to join the new Reforming Mennonite movement. He testified to the holiness experience of “perfect love” in 1877. Jacob became a probationer of the Evangelical United Mennonite Church itinerancy in 1879 at nearby Blair, Ontario and served as pastoral assistant at Berlin (1880-1881). He was ordained at Elmwood, Ontario in 1883. As a pastoral couple, Jacob and Harriet moved to Nottawasaga, Simcoe County (1881-1883), and back to Berlin (1883-1885), which included appointments in Woolwich Township. From 1885 to 1888, J. B. Detwiler edited the MBiC magazine, the Gospel Banner and its German edition Evangeliums Panier, while serving the Blair church for two of those years. In 1888 he was appointed to the MBiC circuit at Elmwood and Hanover and from 1891 to 1893, to the Bethel circuit in Waterloo and Oxford Counties, which included New Dundee.

In 1894 Jacob Detwiler, Harriet and their two daughters joined a migration of MBiC people and others from Berlin organized by his father-in-law, to Didsbury in the Canadian North West Territory and endured the usual perils of pioneering life. Even in 1965, people remembered J. B. Detwiler as a “clergyman, postmaster, letter carrier, land guide, and grocer...[with] a homestead about two miles north of Didsbury...It was too much work for Mrs Detwiler and Mary to carry alone...Besides ministering to his little flock...he ministered to Christians of other denominations, marrying their young people and burying their dead. He is kindly remembered and held in high esteem by those to whom he ministered...” (Swalm and Swalm, p. 10). In 1903 he spent three months in Washington State, USA, as an MBiC evangelist. The Canada Conference appointed Jacob as “missionary presiding elder” 1904-1905 and he was elected presiding elder (district superintendent) 1908-1910, following the establishment of Canadian Northwest Conference in 1906. J. B. Detwiler rejoined the Ontario Conference in 1914, serving as a helper on his old circuit of Bethel in 1916-1917, seven months on the Sunnidale circuit around 1920, and as a local preacher in Kitchener otherwise. In good health, he worked at a Detwiler-owned shoe store up to 1931. He was a man of peace and highly esteemed.