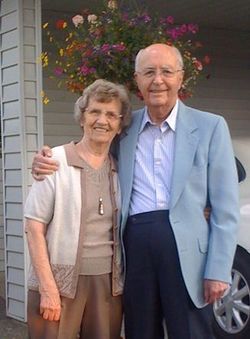 In 1936 the Derksen family moved from Manitoba to Abbotsford, British Columbia, where he received his education at North Poplar Elementary, Bethel Bible Institute (1942-1944) and Mennonite Educational Institute (1944-1947). Peter was baptized on 26 May 1947 by Elder J. B. Wiens at West Abbotsford Mennonite Church. In 1947, Peter went to Winnipeg, Manitoba to study at Mennonite Brethren Bible College (MBBC), where he met his life’s partner, Mary Klassen. Peter graduated from MBBC in 1950 and returned to Abbotsford to teach at Bethel Bible Institute for two years (1950-1952). During this time, Peter and Mary were married in the summer of 1951 in Virgil, Ontario.

Peter was called to the ministry by the East Chilliwack Mennonite and West Abbotsford Mennonite congregations, and was ordained in August 1952 by Elder H.M. Epp. From 1952 to 1953, Peter studied at Bethel College in Newton, Kansas, and from 1953 to 1954 he studied at The Biblical Seminary in New York (later New York Theological Seminary) in New York City, NY. During this time Peter and Mary had two children, Evangeline and Richard.

While at seminary, Peter and Mary sensed God’s call to serve as missions workers in Japan, leaving North America in 1954. They were guided by their life’s motto: For we do not preach ourselves, but Jesus as Lord, and ourselves as your servants for Jesus’ sake. (2 Corinthians 4: 5). In 1954 Peter and Mary were ordained as missionaries to Japan by Elder J. J. Thiessen, and worked in Japan from 1954-1999 under the General Conference Mennonite Church Commission on Overseas Mission. In 1956 Peter was ordained on the mission field in Japan. During their time in Japan four more children were born: Rosaline, William, Wanda, and Lillian. Peter’s children remember him waking them up in the mornings with an enthusiastic "Rise and shine!"

In 1997 Peter had quadruple bypass surgery in Japan. During the final year of life, Peter struggled with his heart condition, Parkinson’s disease, and severe spinal headaches.

After 45 years of ministry in Japan, Peter and Mary returned to Canada and settled in Abbotsford, BC. For seven years (2001-2008) they served the Surrey Japanese Mennonite Church on a part-time basis along with George and Martha Janzen. Peter also continued his ministry using Japanese software, spending hours writing many friends in Japan. During the remainder of their retirement years the Derksens worshipped in the West Abbotsford and Emmanuel Mennonite congregations, and enjoyed time with children, grandchildren, great-grandchildren, and extended family across Canada and the United States.