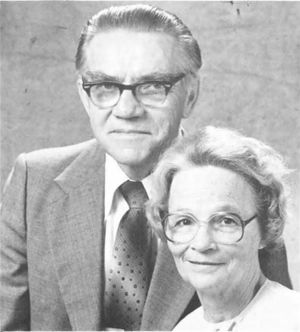 Henry D. Derksen: missionary in the Belgian Congo and Quebec; born 4 February 1916 to David and Susanna (Adrian) Derksen in Fischau, Molotschna Mennonite Settlement, South Russia. He was the ninth of 11 children in the family. Henry married Helen Ewert (16 April 1917, Tschunayevka, Omsk, Asiatic Russia - 17 December 2003, Winnipeg, Manitoba) on 23 September 1947 in Manitoba. She was the daughter of Gerhard and Maria (Dick) Ewert. The couple had three sons and one daughter. Henry died on 16 June 1997 in Winnipeg, Manitoba, and the funeral was held on 21 June in the Elmwood Mennonite Brethren Church.

Growing up as the son of a minister, Henry D. Derksen was immersed in Biblical teaching from a young age. When Heinrich’s father was threatened with arrest because of his work in Fischau, the family decided to immigrate to Canada. The Derksens arrived in Canada in 1927 and settled on a farm near Boissevain, Manitoba, in 1928. Henry completed his elementary education there, and after his conversion at the age of seventeen, he went to study at the Winkler Bible Institute. His studies were interrupted by his alternative service as a conscientious objector, which he completed in Riding Mountain National Park. After he returned, he completed his studies and then continued on to the Mennonite Brethren Bible College, where he graduated with a Bachelor of Theology in 1948.

In 1947 Henry married Helen Ewert. Her family had immigrated to Mexico from Russia in 1924 and then to Manitoba in 1926. She studied at the Winnipeg Normal School, Winkler Bible Institute, and the Mennonite Brethren Bible College. In June 1949, the Mennonite Brethren Board of Foreign Missions accepted Henry and Helen as missionaries to the Belgian Congo (later Zaire and the Democratic Republic of the Congo). The couple spent a year and a half in language study in Quebec and Belgium before leaving for service in central Africa. Henry and Helen lived in six different places during their 27 years there but spent much of the time in Kafumba, where they helped to establish and run a Bible school. In addition to his teaching duties, Henry preached in the churches as often as he could.

Henry and Helen Derksen returned from Africa in 1979 and then were among seven couples who went with the Canadian Conference of Mennonite Brethren Churches' Board of Evangelism to Quebec, where they planted a church in Ste-Thérèse. Henry served there as a pastor for three years. In 1983, the Derksens moved to Winnipeg and became members of the Elmwood Mennonite Brethren Church. Henry developed Alzheimer’s disease in his later years, and he eventually moved into the Donwood Manor Personal Care Home in Winnipeg, where he died in 1997.

Henry and Helen Derksen were dedicated missionaries and church planters whose adaptability to the different circumstances in life allowed them to serve in many different ways. Through their work in Africa and Canada, they left an example for future generations to follow.