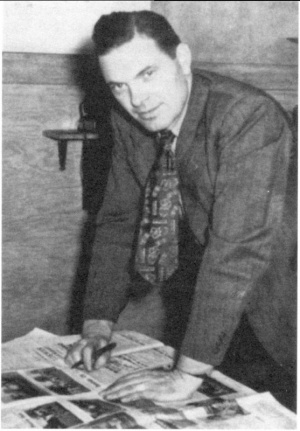 Eugene Derksen: publisher and community benefactor; born on 5 October 1915 in Nikolaifeld, South Russia, the son of Gerhard S. Derksen (21 August 1887, Gruenfeld, Schlachtin, South Russia - 12 April 1957, Steinbach, Manitoba, Canada) and Maria (Unger) Derksen (9 March 1889, Gruenfeld, South Russia - 28 November 1977, Steinbach, Manitoba). He was the second of five children in the family, three of whom were born in Canada. The Derksens immigrated to Canada on 24 August 1923, arriving in Quebec. Because he had contracted an eye disease, Eugene had to stay in a Quebec hospital for seven months before joining his family in Saskatchewan. He married Helena Friesen (2 January 1920, Mitchell, Manitoba - 18 June 2013, Steinbach, Manitoba) and the couple had four children. He died on 16 July 1994 at his home in Steinbach, Manitoba, Canada.

Eugene Derksen’s early life was eventful, being born just before the Russian Revolution and the ensuing anarchy which sent many Mennonites fleeing for their lives. His parents decided to immigrate to Canada when he was seven.

The initial years in Canada were difficult for the Derksen family. Eugene’s father had worked as a teacher in Russia. However, the Canadian government required the immigrants to work as farmers for several years after their arrival, and the Derksen family tried without much success to learn to grow crops and raise animals. When the chance came in 1933 to move to Steinbach, Manitoba to work in a print shop, the Derksens took advantage of the opportunity. Although they knew little about the work, Eugene helped with odd jobs while his father assisted with writing and editing the Steinbach Post. By 1936, the editor was ready to resign from his position, and the Derksens were ready to take the job.

Hard times continued for Eugene Derksen and his father in the years that followed. The Great Depression had drained any extra funds the paper had, and Eugene was unable to fulfill his goal of expanding the newspaper and starting an English edition. Unsuccessful in obtaining a loan for his business from banks in the area, he decided to establish his own financial institution. The Steinbach Credit Union was the result. Eventually, he received a loan from the credit union and on 21 February 1946, he sent the first English-language edition newspaper to the presses. After the death of his father, Eugene became the president of Derksen Printers in 1957. Eugene sold the paper to his son, Erich, in 1983 but continued to write columns for it. In 2007, The Carillon had the highest circulation of any rural newspaper in southern Manitoba.

Eugene was also instrumental in establishing the Mennonite Heritage Village in Steinbach in 1958.

Eugene Derksen lived through many trying times, but his determination and versatility helped him to succeed. He became a caring and generous person, always willing to help people in need.