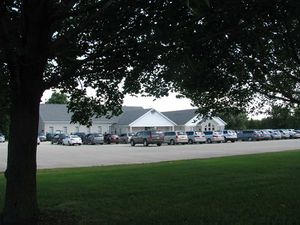 In Spring 1984 the Markham-Waterloo Mennonite Conference experienced internal conflict when it silenced John Drudge, who had served as a minister for ten years. He was silenced for preaching false doctrine. A group of members refrained from communion because of the conference's action. When no settlement was reached by the time of fall communion, the non-communing members began separate worship services, first at private homes and after 14 October 1984 at Floradale Public school. John Drudge served as the minister. The name Crystal View Mennonite Church was chosen on 30 December 1984 by a large majority in a ballot vote from a slate of four names. In fall 1985, 129 members participated in a communion service. A building was erected in fall 1985 with the first service and dedication held in February 1986.

The lack of affiliation with other churches for two years, with the resulting loss of visiting ministers, led members to become dissatisfied and a few families left to attend other churches. However, the majority wished to stay together as a church family. John Drudge, whose ministry was very much appreciated, tried to maintain a more conservative stance that included a relationship to the Markham-Waterloo Conference. However many members had family connections in the more "aggressive" Conservative and Midwest Fellowship churches. After several brotherhood meetings the congregation agreed to seek assistance in becoming better established. In early 1987 a three member Bishop committee was established to assist the congregation. The committee included Lester Heatwole of the South East Mennonite Church in Virginia, Howard Weaver of the Mid-Atlantic Fellowship in Pennsylvania, and Leighton Martin of the Mid-West Mennonite Fellowship in Waterloo, Ontario. They interviewed every family in the congregation. Minister John Drudges and a few additional families did not approve of this direction, and withdrew to form the Mount Zion Mennonite Church in Millbank, Ontario.

After Drudge's departure the Bishop committee provided ministers to serve at Crystal View until ordinations could be held. A committee of Crystal View members drew up a Statement of Faith and Practice that was approved by all members before ordinations were held. This statement, slightly revised in 2002, stated: "We recognize the need for ordained leadership in the church and accept the plural ministry in the local congregation of bishop, ministers and deacons (chosen from the congregation) who form a permanent body to lead in church administration." A board of trustees is elected annually on a three year rotating basis for the maintenance and care of the facilities. A board of directors, elected by the congregation, is responsible for the legal reporting with government and cemetery officials as requested from time to time. A cemetery is located on the same premises as the church building.

Crystal View Mennonite Church affiliated with the Midwest Mennonite Fellowship in 1988, which in 2004 had nine churches in Ontario (out of a total of 35). A portable building was added in 1988 to provide accommodation for children's Sunday school classes which began that year. At first the adults were all in one class but in time this increased to three women's and three men's adult classes in the lobby and the main auditorium. In 2004 the congregation used Sunday school materials from Christian Light Publications in Harrisonburg, Virginia.

The congregation supports various mission projects, often in support of members in service. Christian Aid Ministries, with a warehouse near Wallenstein, Ontario receives major support. For many years some members have served with the Canadian Gospel Echo Team in prison ministry. Crystal View has also supported Mid-West Conference-linked Maranatha Bible School, Fresh Start and Deeper Life Ministries. Youth have served in Africa, Haiti, Grenada, and U.S.-based projects. Northern Youth Programs and similar projects receive some support. The church as also supported Eagle Wings Discipleship Ministries near Port Elgin, Ontario -- a farm which is managed by the Ontario Mid-West Fellowship churches in co-operation with other Mennonite churches, and provides accommodation for residents who seek counseling.

Congregationally sponsored youth activities feature singing as one of the priorities. Musical programs are often held at nursing homes and other institutions. Every second year the youth choir of around forty members has gone on a four or five day tour presenting programs at churches in Pennsylvania, Ohio or Indiana.

In December 2003 attendance (including children) was often about 275.