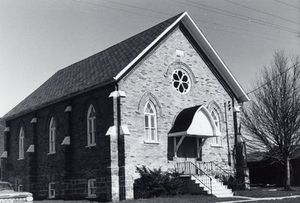 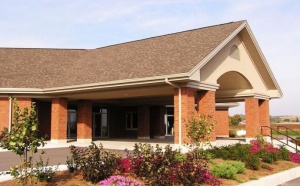 In 1949 the Maple View Mennonite Church near Wellesley, Ontario, purchased the Boyd Presbyterian Church (built in 1888) located in Crosshill, with a dream of continuing a community Sunday school established after the then United Church of Canada congregation closed in 1947. It also wanted to establish a daughter congregation. A re-dedication service was held in the church building in 1950, and members from Maple View Mennonite Church who lived near Crosshill, along with some community neighbors, began to worship at Crosshill.

Orland Gingerich, in his book, The Amish of Canada, suggested that “a more conservative stance by Mapleview bishops” also encouraged Crosshill’s identity as a separate congregation. This stance restricted women with cut hair in worship, and insisted upon a more stricter interpretation of the woman’s prayer veil.

In 1966 Steve Gerber was ordained to be a minister at Crosshill and in 1967 Ervin Erb was ordained to leadership as a deacon. The growing congregation also required more Sunday school space and a larger sanctuary. In 1972 an addition to the 1888 building was completed.

The decades that followed brought leadership changes, introduced the role of elders, found a place for musical instruments in worship, and brought new openness to the role of women in the church.

With the retirement of Ervin Erb in 1984, a team of elders began to help the minister with pastoral care and church leadership. The following years again brought change--perhaps the most visible was the use of musical instruments to aid in worship.

A visioning process in 1996 helped Crosshill to further define its identity and mission. This included a belief that God called it to be a growing, caring, congregation that was involved in the community. In order to have a place for everyone to celebrate God’s presence in worship, the congregation identified the need for an updated, inviting facility.

Following a needs analysis, the decision was made to build a new facility rather than renovate the existing building. A parcel of land was purchased at 2357 Hutchison Road, with construction completed in 2006. The original building was sold to the Crosshill Old Colony Mennonite Church.

Crosshill Amish Mennonite Church is located six miles north of the Wellesley Mapleview Amish Church in Waterloo County, Ontario. The two places of meeting serve the membership of the one congregation, known as the Wellesley congregation. It began in an unused church in which they held summer Bible school in 1948. Two years later the congregation bought the building and began Sunday school. More than 100 worship here regularly. The ministers of Mapleview share in preaching at this place.