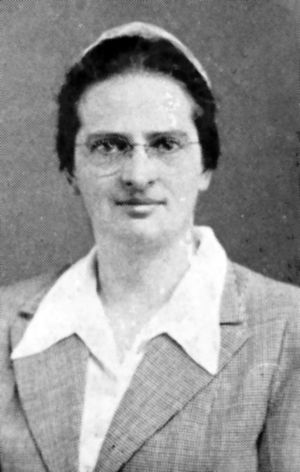 Like most Mennonite farm children of the era, Una worked at home after finishing school at age 14. Independent after her twenty-first birthday, she planned to go to Goshen College (Indiana) as her older sister Vera had done. Immigration officials at the US/Canada border were not satisfied with her plan to study and work part time so denied her entry. After much prayer and with great determination, she made a second attempt to cross the border, this time successfully, and began five years of study in Indiana. She went on to the Mennonite nurses' training school at La Junta, Colorado from September 1931 to October 1934 where she also studied Spanish and the Argentine culture.

Feeling called to be a missionary nurse, Una sent a letter to the Mennonite Board of Missions in November 1938. She was assigned to Argentina but due to the outbreak of war in 1939 she could not sail until early 1940, arriving in Pehuajó late in March. Selena Gamber, whom Una knew as the superintendent of nurses in La Junta, had set up a clinic to care for patients the missionaries had met in outlying towns. After a year of language study, Una helped at the clinic and also cared for missionary families in times of illness or childbirth.

In Pehuajo Una taught Sunday school, helped with women's meetings and started a Sunday school in the slums on the outskirts of town. Then in 1944 she moved to a primitive boys orphanage in the country near Bragado. She cleaned up the place, got rid of bed bugs and scrubbed jars she found to can peaches from the farm, a welcome addition to the boys' diet. She returned home on furlough in the spring of 1946.

In 1948, Una returned to Argentina but this time to the Chaco, the interior jungle where missionaries J. W. and Selena (Gamber) Shank and Calvin and Frances Holderman had established work among the Toba People. Una's sister Mabel, also a nurse, joined her in 1950. The Native Argentines had their own midwives and did not want to leave their families to go to the hospital when ill, preferring treatment by the nurses. Respiratory ailments were common due to poor housing and almost no clothing so Una taught women to knit, supplying needles and wool to make warm clothing. With 100 women in several colonies knitting, there were too few needles so they made some from fence wire.

With the missionary pastor, Una visited those outlying colonies, packing up everything she would need to live in a little brick hut between his visits. When the missionaries left the Chaco, they gave Una their horse and sulky - and much more independence. During her second furlough (1952-54) she was given money for a car but it could not navigate the mud and ruts in the Chaco. After several unpleasant incidents with intoxicated Native Argentines, it became clear that it was not safe for single women to work in the Chaco so both Una and her sister returned home. Una took a refresher course and continued nursing in Ontario until 1970. She moved to Fairview Mennonite Home in Cambridge where she cared for family members already residing there.

Una had a profound Christian faith and firm resolve to serve God and humanity, especially sick and disadvantaged people. Coming from a large, rural family she had limitations of her own but she overcame them to become the missionary nurse she felt called to be.