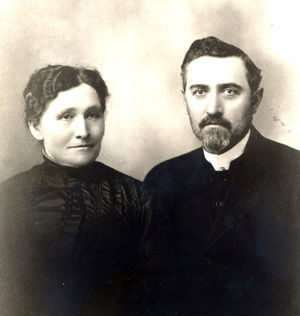 Silas Cressman, pastor, presiding elder and missions advocate of the Canada/ Ontario Conference of the Mennonite Brethren in Christ Church. He was the second of six sons, second of nine children born to his parents, Enos C. Cressman (23 March 1842-23 July 1911) of New Dundee, Ontario, Canada, and Elizabeth Martin Shantz (15 March 1842-29 October 1911) of Roseville, Ontario, a daughter of Bishop Henry P. Shantz, who immigrated to Canada with his parents in 1810 from Montgomery County, Pennsylvania. A younger brother of Silas, Henry Shantz Cressman, was also an elder of the Mennonite Brethren in Christ, and a sister, Saloma Cressman, served in the City Mission Workers Society of the Canada Conference around 1900. Silas was born on the family farm near New Dundee and had a primary school education. He alluded to his lack of fluency in English in one of his contributions to the Gospel Banner.

On 19 March 1890, Silas Cressman married Sarah Wagner (13 March 1863-9 October 1946) of Tavistock, Ontario. Her parents were Jacob Wagner (born in Germany in 1822) and his wife Catherine Stellar (b. 1822) of East Zorra Township, Oxford County, Ontario. Silas and Sarah had seven children (five boys, two girls), plus two boys that died in infancy. Silas Cressman died on 5 September 1935 in Stouffville, Ontario after an illness of six months. He and Sarah are buried in Woodland Cemetery, Kitchener, Ontario.

While farming in Wilmot Township, Silas Cressman was converted in 1886. He became a probationer of the Mennonite Brethren in Christ in 1891, working in his home circuit of New Dundee, then on the Elmwood circuit 1892. The Canada Conference ordained him in 1893.

From 1912 until his death, Silas Cressman was the conference representative on the mainly Mennonite board of the United Orphanage and Mission among Turkish Armenians and treasurer and then chair of the Ontario Conference's foreign mission board (25 years in all). In this position he along with Samuel Goudie and others across the MBiC pressed for a Mennonite Brethren in Christ General Conference foreign mission society over many years. The United Missionary Society (UMS) finally formed in 1921. From at least 1922 until 1935, he was elected annually as an MBiC Ontario Conference representative to the Nonresistant Relief Organization of Ontario along with Sam Goudie and Ephraim Sievenpiper. In 1925, when Peter Goertzen, a Mennonite Brethren pastor newly come from Russia, addressed the Ontario annual conference in German, Silas interpreted for him.

Silas was a friend and colleague of Goudie, Cyrus N. Good and Milton Bricker, all of whom took leading parts in his funeral services in Stouffville and Kitchener. Goudie knew Silas for 50 years and described him as one who had “the great ability to correctly advise those who came to him in times of perplexities.” They had served together on the Reference Committee (district executive) for nearly three decades. Goudie praised Silas for leading all his sons and daughters to not only to know, but also to witness, to the saving power of Jesus. The Stouffville Tribune described him as “kindly and earnest...a strong pleader and a man of considerable weight not only amongst his own people, but in the community as a whole.”

Cressman, Silas. “The Advisability of Having a General Conference Foreign Mission Board.” Gospel Banner (1 January 1920): 2.

Cressman, Silas. “Disadvantages under which the MBC Minister Labors at the Present Time.” Gospel Banner (27 October 1910): 13.