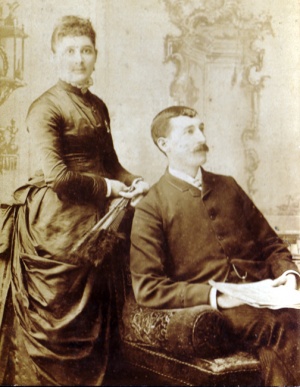 Mary Ann Nahrgang Cressman, "Mrs. M. C. Cressman": the primary "Founding Mother" of the Women’s Missionary and Service Commission of Ontario (Mennonite Church); born 18 November 1864 on a farm south of New Hamburg, Ontario, Canada to Joseph and Mary Ann (Shantz) Nahrgang. She was the fourth child in a family of five sons and four daughters. On 28 June 1887 she married Menno "M. C." Cressman.  The couple moved to Berlin in 1892. They had two children, a son and a daughter. Mary Ann died 10 September 1948 in Kitchener.

Mary Ann's marriage to Menno, a businessman and churchman, gave her contacts and avenues of service not available to many women of that time.  As a result, she was able to attend the General Conference in Indiana in 1916, where a few women met to organize service groups in the district conferences. Mary Ann was asked to be the "Branch Secretary," or representative, for the Ontario district. Thus, she became a key person in establishing the Women's Missionary Society, both in Ontario and in North America. She made a great effort to persuade women on the grassroots level to organize groups in their individual churches and in so doing, to seek approval from church leaders.

In 1929, due to the concerns of male church leaders that women were overstepping their bounds, the conference-wide Society disbanded, and re-organized as the General Sewing Circle Committee, under the auspices of the Mennonite Board of Missions and Charities. Mary Ann was the only executive member from the old organization to become part of the new executive, on which she served continuously until 1940. In this capacity she carried on an extensive correspondence with other women, despite the loss of her right arm in a buggy accident in 1896.

In 1933 Mary Ann wrote an article titled "The Necessity for Spiritual Unity" for the Missionary Sewing Circle Letter. In 1934, she wrote a short history of the sewing circles in Canada. Today, Mary Ann is recognized as a pioneer in the organization of women’s groups in the Mennonite churches of Ontario and North America.