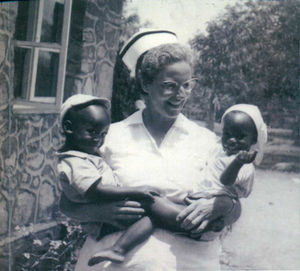 Elsie Cressman: missionary and midwife; born 13 April 1923 in Wilmot Township, Ontario, Canada, to Curtis and Amanda (Byler) Cressman, the fourth in a family of 4 daughters and 2 sons. She never married. She died 11 September 2012 in New Hamburg, Ontario. She became a Christian in her youth and became a member of the Biehn Mennonite Church (later Nith Valley) where her father was a pastor.

In 1953 the Eastern Mennonite Board of Missions and Charities approached Elsie, and asked her establish a leprosarium in Tanganyika (now Tanzania) on the shore of Lake Victoria. Elsie accepted the challenge and was instrumental in turning a no-man’s land of briars, thorns, vines, and rocks into an attractive area of huts, medical dispensary, medical wards, and a chapel surrounded by flowers and fruit trees. After 15 years of leprosy work and attending the births of numerous infants, Elsie enrolled at Mothers’ Hospital in London, England, to become a certified midwife. She returned to Africa and managed a medical clinic on Rusinga Island, Kenya, for three years. She supervised the delivery of over 1000 babies there. She also spent several months in Somalia under the Eastern Mennonite Mission Board.

Upon returning to Canada in the late 1970s, Elsie attended Grace Mennonite Fellowship until her death. She worked at Grand River Hospital in Kitchener, Ontario, for a time before concentrating her energies on providing midwifery services to those who desired a home birth. She was instrumental in attaining legal status for midwifery in Ontario and was awarded the Order of Ontario for her efforts. She helped establish a birthing center in St. Jacobs, and helped to deliver over 3000 babies. Many Old Order Mennonites appreciated this service.

Elsie was the subject of a Metamedia television documentary, Return to Africa, in 2010. In 2012, Nancy Silcox wrote Elsie’s biography, Elsie Cressman: A Trailblazing Life, which includes accounts of her shooting a hippopotamus, riding a motorcycle, and climbing Mount Kilimanjaro.

Elsie’s strong personality and love for adventure enabled her to pursue goals that were unusual for women of her generation. In 2013, Elsie was inducted into the Waterloo County Hall of Fame.