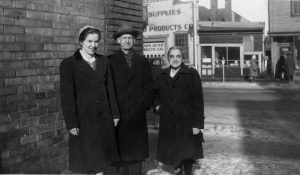 Joseph Cramer was founder of the House of Friendship, Kitchener, Ontario, Canada. Born on 13 July 1892 in Kiev (Kyiv), Russia, which later became the capital of the Soviet Socialist Republic of Ukraine, Cramer was a Jewish rabbi who chose to become a Christian. Nothing is known of his parents or family except that his father was a druggist and mill owner. Joseph Cramer died in Kitchener, Ontario on 28 July 1949 and is buried in First Mennonite Church's cemetery.

Joseph studied in Austrian and Romanian universities, graduating with a philosophy degree. He returned to Russia to study medicine and was within a year of completing his degree when the Russian Revolution exploded. Loyal servants tried, unsuccessfully, to protect the wealthy Cramer family from the anarchists. Young Joseph managed to escape and flee to Europe after seeing the Bolsheviks kill his father. Years later, Joseph refused to discuss anything about his family but his colleagues in Kitchener, Ontario, felt he was reliving their suffering as stories of Hitler's Jewish holocaust victims appeared in the news.

In 1932, after turning to studying religion, Joseph came to Toronto, Ontario where he attended a Christian service, a first step to converting to Christianity. He spent time in New York working in a mission called “God's Power House” before returning to Ontario.

A member of an interdenominational prayer group of Waterloo women with a passion for Jewish evangelism met Cramer and invited this “Jewish scholar” to come to Waterloo to lead a mission to Jewish people. Joseph agreed and in addition to working with Jews he and his co-worker, Ilda Bauman, a woman from Erb Street Mennonite Church in Waterloo, soon reached out to new immigrants from many European countries. The newcomers, who didn't speak English, were delighted to be able to talk to Joseph, who spoke eight languages.

In the first year of this mission, Joseph, Ilda and the prayer group women made hundreds of home and hospital visits, distributed clothing and Christian literature in many languages, and set up shop in a downtown Kitchener store front to serve meals and conduct worship services. Clients included veterans, alcoholics and transients. At a Sunday service on 15 January 1939, “The House of Friendship for all Nations” was dedicated.

Bishop C.F. Derstine, pastor of First Mennonite Church in Kitchener, saw that the struggling mission needed help. He solicited and achieved financial and volunteer support from his own congregation, other Mennonite churches, the Mennonite Conference of Ontario, local businesses and Kitchener's city hall. Derstine became chair of “The Advisory Committee” (Board of Directors) and Joseph was named director. There is no evidence that Joseph Cramer ever joined a Mennonite church nor was the mission ever a “Mennonite” one but throughout its existence House of Friendship has received strong support from Mennonites.

Inspired by its Christian roots, with support from many churches and faith groups, community organizations and several levels of government, House of Friendship has provided hope along with housing, emergency food and assistance to thousands of men, women, youth, children and people often struggling with mental health issues and addictions. House of Friendship marked 75 years of service by remembering founding director Joseph Cramer throughout its activities in 2014.