From GAMEO
Revision as of 13:35, 5 August 2017 by SamSteiner (talk | contribs) (added image and category)
(diff) ← Older revision | Latest revision (diff) | Newer revision → (diff)
Jump to navigation Jump to search
A checked version of this page, approved on 5 August 2017, was based on this revision. 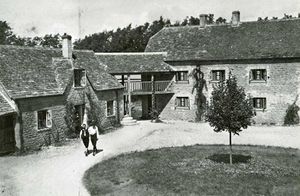 Cotswold Bruderhof, Ashton Keynes, Wiltshire, England. Early in 1936 a Hutterite community was founded here by members of the brotherhood organized by Eberhard Arnold in Germany in 1920. The connections with England, which had existed from the beginning, were cultivated and deepened by lectures and visits, so that from 1934 an increasing number of seekers in England came to the Bruderhofs in Germany and Liechtenstein. Thereby the stage was set for active work in England.

As an initial step, the brotherhood leased some buildings and lands of the Ashton Fields Farm, and in 1936 purchased the entire estate, gradually increasing it to 500 acres. From the first, an intensive program of agriculture was practiced. Around the meeting hall and the dwelling houses in the center of the court there were groups of other buildings for schools, children's houses, farm buildings, and workshops. Agriculture with gardening, farming, poultry raising, dairying, and beekeeping formed the foundation of the economic life, supplemented by other activities like cabinetmaking, publication, printing, and bookbinding. The educational work and school system grew through the influx of new families and the admission of needy children from England and Austria. The rise and growth of the Hutterite communal living stirred the spirits of seeking pacifist circles in England; many united with the brotherhood. The task of propagating the witness of the brotherhood by book and periodical literature was served by the output of the Plough Publishing House, Ashton Keynes, especially by the periodical The Plough and its German version, Der Pflug. The most important publication was a new edition (1938) of the Rechenschaft unserer Religion, Lehr und Glaubens by Peter Riedemann, and an English translation in 1950. Besides missionary journeys within the country, the Brethren also traveled through Holland, Sweden, and Switzerland. The inner structure of the brotherhood with respect to community of goods, the training of children, sharing of work, inward composure, and the testimony to the outer world were carried out in complete agreement with the traditional Hutterite practices and principles as they were established in the Rhön Bruderhof and the Alm Bruderhof. Connections with the Hutterian Brethren in America were strengthened through the visit of the elders David Hofer of Manitoba and Michael Waldner of South Dakota. With the increase of the size of the colony caused by the compulsory abandonment of the Rhön Bruderhof in Germany and the transfer of the Alm Bruderhof, the membership of the Cotswold Bruderhof grew to 250 by the end of 1938, so that steps had to be taken in 1939 to establish another Bruderhof at Oaksey, four miles east of Ashton Keynes. The name "Society of Brothers" was chosen as the name for the entire brotherhood.

The further growth of the brotherhood was interrupted by World War II, and the entire colony migrated to Paraguay. Although the British members were released from military duty by the local tribunal, and the restrictions originally placed upon them as Germans were also removed, since they were regarded as refugees from National Socialist oppression, nevertheless a strong popular feeling of antipathy arose among the neighbors of the communities because of their German background. This feeling became stronger after the collapse of France in 1940, assuming increasingly unpleasant forms. Questions were raised in both houses of Parliament; the answers given were favorable to the colonists. But when a popular boycott made the sale of their produce more and more difficult, and the government, yielding to popular pressure, was about to intern the German members, the brotherhood decided to emigrate in order to preserve community with people of the various nations. They sent two brothers to the United States and Canada to secure permission for the entire body to immigrate to one or the other of the two countries, hoping to be able to settle in the neighborhood of the American Hutterite colonies. This attempt failed in spite of the affidavit of the American Hutterian Brethren in Washington and their intervention in Ottawa. Finally through the mediation of the Mennonite Central Committee, the colony was able to settle in Paraguay in 1940 and 1941, where they founded the Primavera colony. Since a small number had to remain behind in England to finish the business of closing the Cotswold Bruderhof, and this group at once began to increase in size through the admission of new members, the Wheathill Bruderhof was organized in England in 1942 to take the place of the Cotswold Bruderhof.

Der Pflug and its English version The Plough, 1938-1940, contain reports of the rise and growth of the new Hutterian Brotherhood in England and articles by Eberhard Arnold on Hutterite history, such as Claus Felbinger's Rechenschaft vor dem Rat zu Landshut von 1560 (II, Nos. 1, 2, and 4), Johannes Waldner's short sketch of Hutterian history from a letter in the Moravian (Herrnhut) archives of 1811, brought up-to-date to 1938 (I, No. 1), David Hofer's report of the dissolution of the Rhön Bruderhof (I, No. 3), J. G. Ewert's account of the sufferings of the Hutterian Brethren in World War I (II, No. 2), besides some references to the relations of the Quakers with the Hutterian Brethren in Hungary in 1663 (I, No. 4 and II, No. 1). The Plough Publishing House, Ashton Keynes, published the series of Eberhard Arnold's Lectures and Writings in the following booklets: (1) The Early Christians; (2) The Individual and World Need; (3) God and Anti-God; (4) The Peace of God; (5) The Hutterian Brothers: Four Centuries of Common Life and Work. A supplement of The Plough was issued in 1938 with the title, Children in Community; it contains articles and reports on the education and schoolwork of the children in the Cotswold Bruderhof.