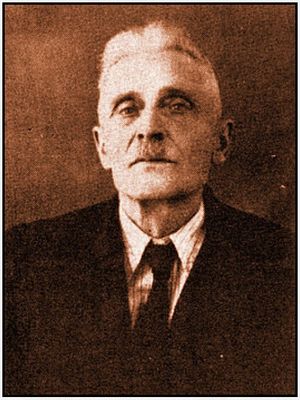 Philipp David Cornies: outstanding teacher, Russian Mennonite leader, agricultural technician and GuLag survivor; born 25 September 1884 in Spat, Crimea, as son of David Cornies, and grandson of David, an older brother of the noted Johann Cornies. He attended school in Ohrloff, then spent two years in the normal school in Halbstadt. He taught elementary school in Klubnikovo, Neu-Samara, 1902-1905, where he married Elisabeth "Luise" Penner (1886-1934) then in Rosenort in the Molotschna 1905 to 1923 until forced out by the Bolsheviks. He served on the Executive Committee of the Molotschna Mennonite Teachers Association. He was also a poet of some ability. He refused ordination as a preacher, although he preached occasionally, and was a master of the Russian language. After 1922 he served with B. B. Janz in the leadership of the Verband der Bürger holländischer Herkunft. In one of his several imprisonments through torture he was forced to promise to stay in Russia and help build up the country, which promise he kept, serving several places as a technician in agriculture, and later as director of a dairy cattle breeding project in the concentration camp region of Ukhta-Pechorski Kray where he was last seen by Jacob A. Neufeld in 1942. Earlier he had spent five and a half years in the concentration camp in North Russia on the Solovetski Islands.

In 1954 family members learned that Philip David Cornies was still alive and living on a state farm in Vorkua. Despite 20 years spent in a labour camps, he was in reasonable good health, according to a report in 1958. He was still actively writing and translating poetry.

Soviet records show that Philipp Cornies was living in Losovaya, Kharkov district when he was arrested on 25 November 1933 and initially sentenced to 10 years of hard labour. His released from the labour camp occurred in 1954 and a declaration of his rehabilitation occurred in 1990.