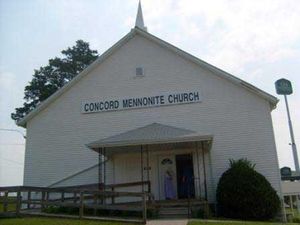 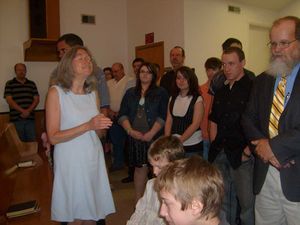 Concord Mennonite Church is located in the very west end of the city of Knoxville in Knox County, Tennessee. In the early 1870s a group of Pennsylvania Dutch located in the area. The group was a mix of Amish Mennonites and Mennonites who were drawn to the area by an abundance of cheap well-watered land and a mild climate. People came from Pennsylvania, Ohio, and Michigan. In 1874 the group numbered 54 people with 21 of them being members of the church.

The current (2013) Concord Mennonite Church building was built about 1887. John Stoltzfus Sr. was the first pastor. He became affectionately known as Tennessee John. During the first several decades the congregation was unaffiliated with any conference. If the services of a bishop were needed, an appeal was made to a bishop in either Ohio or Virginia. The congregation eventually became members of Virginia Mennonite Conference. With Concord in a mission setting, the conference and other groups sent many people over the years to help with Bible school and other areas of church life.

Over the years various people came and went, some going back to where they came from and others joining other denominations in the area. Many people, both in Knoxville and in Virginia Mennonite Conference, have had ties to Concord Mennonite.

The pastor with the longest influence was William Jennings who began as pastor in 1912 and over the years served both Concord Mennonite and Knoxville Mennonite congregations both as pastor and bishop. He served as bishop well into the 1950s.

In 1989 Matt Matteson became the pastor and served for 19 years until 2008. During that time the official membership did not change significantly. Involvements and activities of the church were individual and community centered. Short term members and regular attenders were involved in foster care of children, Teen Challenge, Habitat for Humanity, teaching in an alternative school, working in conflict resolution, Ten Thousand Village sales, peace advocacy, evangelism among other faith groups, employment in inner city schools, AmeriCorps service, and Mennonite Central Committee service. The flavor of the church was nurturing and enabling of participants in their own sense of call.

Elder Jerry Hartness gave leadership to the congregation from the conclusion of Matt Matteson’s ministry until Willis G. Hunsberger accepted the pastorate in April of 2009.

Concord Mennonite Church (Mennonite Church USA) is located west of Knoxville, in Knox County, Tennessee. The abundance of cheap well-watered land and a mild climate attracted Amish Mennonites and Mennonites to this area soon after the Civil War. In 1874 the Mennonite community numbered 54 souls, 21 of whom were members of the church.

It seems that the Ohio Mennonites assumed some responsibility for the church there at first, but now the church is under the Virginia Conference. The Concord Church did not continue to grow. A number of the original families moved elsewhere. Today the presence of a large frame church and numerous graves in the yard adjacent to the church are mute testimonies to the existence of a once flourishing congregation. There were 17 members in 1954, with William Jennings the long-time resident bishop.