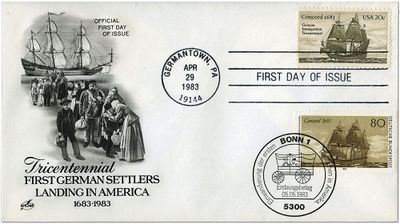 The Concord left London, England on 24 July 1683 and arrived in the port of Philadelphia on 6 October after a voyage of 75 days. Here the German immigrants were greeted by a German lawyer, Franz "Francis" Daniel Pastorius, a close friend of Willian Penn. He had arrived in Philadelphia earlier in August to help prepare for the arrival of the Concord. Pastorius assisted the newcomers in establishing the Germantown Mennonite Settlement.

Although the Concord carried a complement of 40 crewmen and 120 passengers, these are the family heads recognized as constituting what has become known as "The Thirteen" (in alphabetical order):