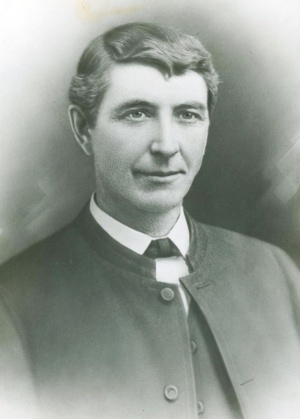 John Samuel was the eldest of 12 children born to Samuel and Frances Weaver Coffman. His birth occurred on the J. R. Keagy farm, near Mount Crawford, and he grew to manhood on his father's farm near Dale Enterprise. At the age of 16, Coffman was converted and baptized in Muddy Creek, near the Bank Church. A short time later, to avoid being drafted into the Southern army, he escaped into Cumberland County, Pennsylvania, where he remained until the end of the war.

Coffman's formal education was limited, consisting chiefly of a number of terms in a night school established for the boys of the community by David A. Heatwole. By dint of much reading and private study, he was later able to pass the required examination to secure a teacher's certificate. He spent one term at Bridgewater Normal School in 1875.

On 11 November 1869 Coffman was united in marriage to Elizabeth J. Heatwole, daughter of John G. and Elizabeth Rhodes Heatwole. Seven children were born to them: William, Samuel F., Jacob, Ansel, Fannie, Daniel, and Anna Barbara. The first three years of their married life they were tenants on the Margaret Rhodes farm near Dale Enterprise, after which Coffman purchased a 30-acre farm on Gravelly Hill, at the foot of Mole Hill. In 1874 he began teaching the grade school at Montezuma, where he taught for two winter terms, followed by two terms at Paul Summit.

On 18 July 1875 John S. Coffman was chosen by lot and ordained to the Mennonite ministry at the Bank Church, near Rushville, Virginia. During the next four years he filled many appointments in Rockingham and Augusta counties and in West Virginia. Being gifted in music, Coffman conducted a number of singing schools in the community, which did much to stimulate four-part singing and instill an appreciation of the better type of church music.

It was on the invitation of John F. Funk, head of the Mennonite Publishing Co., Elkhart, Indiana, that John S. Coffman moved with his family to Elkhart in June 1879. Here he became the assistant editor of the <em>Herald of Truth</em>, contributing many original articles and editorials during the next few years. In 1880 he began to work on material for Sunday schools, and produced a small volume for teachers entitled Infant Lesson Book. A second edition of the work was published in 1891. Later he edited weekly lesson sheets for the Words of Cheer, and from 1890 to 1899 served as editor of the lesson helps which appeared first in monthly editions and then in quarterly form. Other editorial work included collaboration with Funk on the Minister's Manual and Confession of Faith, 1891; and a small booklet, Fundamental Bible References, 1891. He was a member of the committee of five chosen to compile Hymns and Tunes, published in 1890, and following the organization of the Mennonite Book and Tract Society in 1889, Coffman served as tract editor for a number of years, as well as president of the organization.

But it was as evangelist that Coffman made his greatest contribution to the Mennonite Church. Since "protracted" or evangelistic services were generally in disfavor at this time, as savoring too much of aggression, Coffman proceeded with the utmost caution, his natural tact and winning personality being great assets in breaking down barriers and paving the way for the spirit of evangelism characterizing the church of the 20th century. Early in his ministry Coffman became burdened for the welfare of the many small, newly established congregations, frequently found in the western and midwestern states, struggling bravely to compete for the interest of the young people with other large denominations. He was particularly distressed by the number of young people being lost to the church through lack of spiritual encouragement and guidance.

Coffman's first series of evangelistic meetings was held in Kent County, Michigan, in June 1881. By the end of a week nine confessions had been made and the church greatly encouraged. During the next few years many invitations were received from all parts of the church for similar services, and by the end of the century practically every district of the church in the United States and Canada had benefited from his efforts, hundreds of individuals having been brought into church fellowship.

Coffman was a forceful and able speaker, commanding respect and attention from all classes of people. His effort was constantly directed toward building up the church, and major emphasis was placed upon teaching the Word and expounding the peculiar doctrines of the church. He also showed great charity and tact in his fellowship with the Amish congregations found in many Mennonite communities, and assisted in bringing about an amalgamation of a number of Mennonite and Amish congregations.

John S. Coffman was a strong promoter of Sunday schools and young people's meetings. He assisted in the organization of the first Sunday-school conference held in Indiana, October 1892, and encouraged Biblical instruction in the churches in the form of Bible conferences. He was also a prominent figure in promoting missionary activity in the church.

Coffman was one of the earliest church leaders to sense the need of providing a liberal education for young people under the auspices of the church. On the opening of a business and normal school at Elkhart in the fall of 1894 by Dr. H. A. Mumaw, Coffman braved the storm of opposition from church leaders and laity and bent his energies toward supporting the institution. He became the second chairman of the board of trustees of the private organization known as the Elkhart Institute Association, and during the few remaining years of his life gave much of his time to promoting the work of the school, which was the forerunner of Goshen College.

Coffman's death, which occurred at his home in Elkhart at the age of 51, was attributed to a malignnant growth in his stomach from which he had suffered for a number of years. Funeral services were held simultaneously in Elkhart and Virginia, and interment was made in the Prairie Street Cemetery at Elkhart.