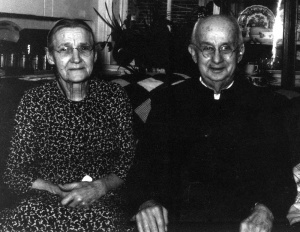 Jacob C. "J. C." Clemens: minister and evangelist; born 2 April 1874 in Franconia Township, Pennsylvania, to Jacob N. and Elizabeth Cassel Clemens; died at Lansdale, Pennsylvania, on 14 May 1965. When he was a boy of 10, the family moved to Mainland, Pennsylvania, where he grew to manhood on a farm located on the banks of the Skippack Creek.

After completing elementary school, he attended Sumneytown Academy and Perkiomen Seminary, Pennsburg, Pa. This was the best type of preparation for a young man of his day to obtain. He began teaching in local public schools at the age of 17. After spending 12 years in the schoolroom, J. C. chose banking for his vocation. He was employed for six years as treasurer of the Lansdale Trust and Safe Deposit Company. At the time of his ordination to the ministry, he had an offer to a position in the Montgomery Trust Company, Norristown, Pennsylvania, but he chose to serve as a minister of the Gospel.

On 14 November 1906 J. C. shared the lot for minister with four other brethren in the Plains Church, Lansdale. He was chosen, ordained in the same service, and continued as minister in the same church for over 58 years. He began to preach English sermons immediately; this made him one of the early English preachers in the Franconia Conference. He services were much in demand in neighboring churches.

In addition to preaching in the Mennonite churches of eastern Pennsylvania, he accepted invitations to preach in union chapels and in churches of other denominations. He could interest all from the youngest to the oldest. He could take difficult Bible portions and make them so simple that all could understand. His greatness in preaching was in the simplicity and orderliness of his messages.

J. C. was appointed as the first secretary for the Franconia Conference in 1909, and served until 1949. He was a charter member of the Franconia Historical Society and one of the leading promoters of the Franconia Mennonite Aid Plan for Mutual Fire Insurance, which began in 1936.

He was active during World War I as a frequent visitor to the conscientious objectors in the camps. He served on numerous committees in the Franconia Conference, including the district Peace Problems Committee from 1937 to 1949. He had a deep interest in church music, and promoted special singing long before many others could see any value in this.

Throughout his lifetime he served in the church without salary. He did receive personal gifts and some offerings for evangelistic and Bible conference work, and later shared in the "love offerings" lifted for and shared by three ministers in the Plains Church. But this never provided very much toward his living needs. When one thinks of the fact that if he had continued in the banking career, he with his abilities would likely have become a bank president, for him to have given his whole life to the church has more meaning.

J. C. Clemens was first and foremost a church man, but he was also a family man. On 27 May 1899 he married Hanna C. Rittenhouse, and the Lord blessed them with six children: Ernest, cashier of the Harleysville National Bank; Ruth—Mrs. Abram A. Landis, Lederach, PA; Paul, who before his death in January 1965 served as a minister in the Worcester [Methacton] Church, Fairview Village, PA; Jacob R., purchasing agent at Martin Century Farms, Lansdale, also active in church work, serving as secretary of the Franconia Mission Board and as vice-president of the General Mission Board, Elkhart, Indiana; James, Goshen, Indiana, librarian at Goshen College; and Betty—Mrs. J. David Nyce, Lansdale.