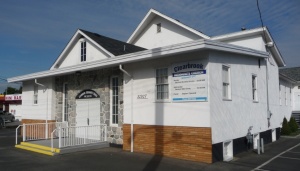 In the late 1940s and early 1950s West Abbotsford Mennonite Church experienced significant growth. By 1952 the sanctuary was filled to capacity on many Sunday mornings. The congregation decided to build a daughter church in Clearbrook. Abraham H. Loeppky donated a lot on the corner of Clearbrook and Peardonville roads. West Abbotsford agreed to help finance the new structure and to draw up a list of people from the church interested in starting a new church. The church, built with much volunteer labor, cost $12,000.

By 1972 almost 70% of the congregation was over 60 and by 1978 almost 95% of the members were retired. The church continued to attract older members moving into the Clearbrook/Abbotsford area until the 1990s, when attendance began to decline. A strong emphasis on the German language remains. The 2011 membership stands at 49 with a weekly attendance of between 36 and 42. Between 1952 and 2011 the church has conducted 339 funerals.

Abram Loewen, who also owned a bookstore in Abbotsford and Chilliwack, led this congregation from 1953 to 1957. Hugo and Susanne Scheffler, German immigrants who lived in Bellingham, Washington, served from 1957 to 1963. Walter and Annie Thieleman had come from Paraguay and during their ministry the membership of the Clearbrook Mennonite Church increased. With Walter’s musical talents, the church was richly blessed during their ministry, which lasted from 1989 to 1995. Hans Federau, also with Paraguan roots, and wife Alice brought a seasoned, pastoral presence to the congregation. During their ministry the Wellspring Christian Fellowship was invited to use the church building for their Saturday worship services. Siegbert Zukowski is presently pastor.

The motto of the Clearbrook Mennonite Church is taken from Psalm 102: “Worship the Lord with gladness.” The main emphasis in the church is worship and fellowship and the congregation’s greatest strength is prayer and financial support of conference programs.

Churches in Profile. Conference of Mennonites in British Columbia, 1978: 37-40.