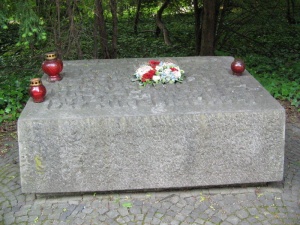 Adolf Clarenbach was a widely celebrated Protestant martyr, who was burned at the stake in Cologne, Germany on 28 September 1529, with Peter Fliesteden. He was born at the close of the 15th century on the farm "zum Busche," which belonged to the ecclesiastical district of Lüttringhausen near Lennep. Until 1514 he studied in Münster, probably in the school of the Brethren of the Common Life, in 1517 acquired the Master's degree at Cologne, and then became a humanist teacher in Münster, but never a cleric. In 1524 he became second master of the city school at Wesel, where he became a friend of Johann Klopreis. Expelled from Wesel because of his Protestant convictions (11 September 1525), he betook himself to Osnabrück accompanied by a large number of students, took a position as a Latin teacher in the house of a pious widow, and also lectured on several books of the New Testament. Expelled again, he went to Lennep at Easter 1527. Here he wrote his most important book, in which he treated the evangelical faith as a matter of faith, hope, and charity in contrast to law, and sharply exposed the errors of the Catholic Church. But he could not stay here either. He turned to Büderich to his friend Klopreis, and when Klopreis was summoned to Cologne the second time because of his heretical views, he accompanied him to defend and encourage him. Both were arrested on 3 April 1528. Whereas Klopreis escaped on New Year's night, Clarenbach remained in a prison cell with Peter Fliesteden. After unspeakable suffering, during which they comforted each other, both suffered a martyr's death. Clarenbach was heard to cry from the flames, "Lord, into Thy hands I commend my spirit." The third centennial of their death was publicly celebrated in 1829. On the elevation between Lennep and Lüttringhausen a stone with an appropriate inscription was erected to the memory of Clarenbach.

Was Clarenbach a follower of Luther, an Anabaptist, or perhaps a member of the old-evangelical churches which had their seat in the Rhine region until the Middle Ages? Keller, Rembert, and others thought the last was the case; C. Kraft and G. Bossert claim him positively for the Lutheran Church. Johannes Hillmann and Eduard Bratke see in him an independent personality. It is nevertheless very probable that he was influenced by Anabaptist ideas and thoughts, which were strongly represented in the region of Cologne. His positive rejection of the oath, his relation to the "brethren," such as Klopreis, Westerburg, etc., his concept of communion and baptism, which he calls a dying of all carnal desires and a putting on of the new man, makes this clear. But with the scarcity of material on the subject his Anabaptism can hardly be conclusively proved.