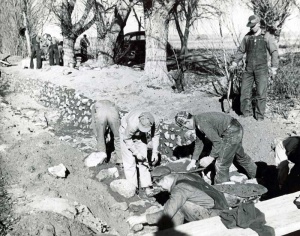 CPS Camp No. 5, a Soil Conservation Service base camp, was located in the buildings of the former Templeton Gap Civilian Conservation Corps Camp three miles (five km) northeast of Colorado Springs, Colorado (vicinity of the southwest corner of present-day intersection of Union Boulevard and Fillmore Street). Mennonite Central Committee (MCC) operated the camp, which opened in June 1941 and closed in May 1946. Side camps were also located at Walsenburg and Trinidad, Colorado (some 90 and 130 miles (145 and 209 km) south of Colorado Springs, respectively) to provide housing for men working on temporary projects in those areas.

The camp's capacity was 165 men. Camp statistics revealed a more cosmopolitan group than that found in some MCC camps. As of 1 October 1942, the 143 men came from 12 states, 10 different branches of the Mennonite church, and 13 other denominations. During the war years the camp drew a total of  507 conscientious objectors. Approximately, 25 percent of these men were non-Mennonites while the remainder were Mennonites and Amish of various denominations.

One of the camp's major projects was construction of a large dam across the Fountain River which supplied water for two irrigation systems. In a side camp at Trinidad 25 men rebuilt a washed-out dam on the Purgatoire River so that irrigation water could again flow to area farmers. Nearly 25 percent of the camp's men performed emergency agricultural labor since many farmers were at war.  Assignees planted several million trees in the Pike National Forest and shingled the roof of the Summit House on Pikes Peak.

The camp's men performed more than 60 different types of jobs in the field and at the camp. The first group to arrive repaired and cleaned the camp buildings under the supervision of Willis Kanagy. Additionally, some men performed duties associated with the operation and maintenance of the camp such as working in the kitchen and laundry and serving as night watchmen.

Robert Kreider was appointed educational director for the camp and Ray Schlichting as business manager. Both continued to serve the Mennonite Central Committee in a variety of roles until 1948, "thus giving the longest terms of service" of any appointees.

The camp enjoyed good relations with the community of Colorado Springs. Camp men regularly engaged in softball and other sports contests with the local YMCA, and the camp's musical groups gave programs in the town's churches. The Colorado Springs community rallied in support of the camp when in the spring of 1943 it was rumored that the camp was to be closed.

In July 1942 men at Cascade Locks, Oregon, CPS Camp No. 21 protested a government order to have George Kiyoshi Yamada discharged from CPS and assigned to a Japanese American internment camp. The Selective Service and the War Relocation Authority agreed to allow Yamada to transfer to an inland camp and in late July 1942 he arrived at CPS Camp No. 5 where he worked on the dishwashing crew. During his three years at Colorado Springs, he participated in a Congress of Racial Equality civil rights project to racially integrate the town's theaters.

By January 1945 forty wives of the camp's assignees had moved to Colorado Springs, and the community residents often advertised for "Mennonite women" to fill jobs. In the base camps, men could not stay with their wives overnight. Since two military bases (Fort Carson Army Base and Peterson Air Force Base) and a CPS camp were located near Colorado Springs, most military and CPS wives lived nearby in apartments or flats amid challenging and crowded conditions. Many CPS wives volunteered as camp nurses, dieticians, and matrons, providing invaluable contributions to camp morale.

In September 2005 the Colorado Springs CPSers held their 60-years  reunion at Crosswind Conference Center in Hesson, Kansas with 54 participants. A reunion in 1999 had 147 participants.

Unrau, Harlan D. In Pursuit of Land, Health and Mission: a History of Mennonites in the Mountain States Region. Printed in Canada by Blitzprint Inc., 2007.