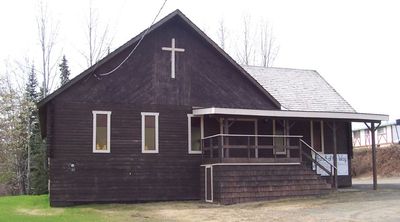 Church of the Way, Granisle, BC
Source: MCBC

The Church of the Way had its origins in a Bible study that developed in Granisle, British Columbia, which drew the attention of some of the members of First Mennonite Church at Burns Lake, including the pastor, Ed Giesbrecht. They decided to help out with the Bible study and initiate a children's educational program.

In 1973, Ed Giesbrecht asked for support and physical assistance from the Conference of Mennonites in British Columbia. The Missions Committee of the conference sent George and Carol Born in 1974 to fill the vacancy. By working with the local Anglican rector, regular Sunday morning worship services began as well as Sunday school and a Wednesday fellowship.

A transient mining population made it difficult to maintain sufficient numbers in the beginning. However, as time passed, the congregation grew enough to justify constructing a church building of their own, which they began to occupy in 1979. In the same year, the congregation adopted the name, Church of the Way, and officially became affiliated with the BC Conference of Mennonites. In 2006 the church was the only Christian community actively conducting regular services.

Churches in Profile. Clearbrook, BC: Conference of Mennonites in British Columbia, 1978: 55-57.

Church of the Way Ministers

Church of the Way Membership