From GAMEO
Revision as of 01:49, 9 April 2021 by RichardThiessen (talk | contribs) (Added hyperlink.)
(diff) ← Older revision | Latest revision (diff) | Newer revision → (diff)
Jump to navigation Jump to search
A checked version of this page, approved on 9 April 2021, was based on this revision. 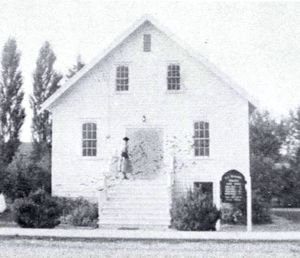 Mennonites had come into the Chilliwack area of British Columbia from the prairies in the 1940s. A congregation, initially known as the Westheimer Mennoniten Gemeinde, had been formed in 1945 but a division of opinion on many matters due to the influence of revivalism caused a split in 1947. The group that remained became the East Chilliwack Mennonite Church and the new congregation was named the First Mennonite Church. The new congregation held its organizational meeting on 18 May 1947 in the Strathcona School, led by Elder Wilhelm Martens from the First Mennonite Church Greendale. There were 40 charter members. Gerhard D. Loewen is considered the founding leader of the group. On 30 August 1947 the congregation was able to purchase the church building formerly owned by the Zion Evangelical Church. It was located at 428 Wellington Avenue, four blocks from the city center.

The congregation dissolved in 1978 due to declining membership, and differences in theology. Long standing internal struggles and deep tensions between the "charismatic" and "traditional" led to the decay of the congregation. Eventually the congregation accepted a resolution to dissolve and turn over the church property and assets to the Conference of Mennonites in British Columbia with the view to establishing a new congregation under the leadership of the conference. The formal closing and thanksgiving service was held on 10 December 1978. The building was subsequently sold to the Victoria Avenue Baptist Church in Chilliwack, which held a dedication service under the new name of Evergreen Baptist Church in October 1980.

Churches in Profile. Clearbrook, BC: Conference of Mennonites in British Columbia, 1978: 32-34.