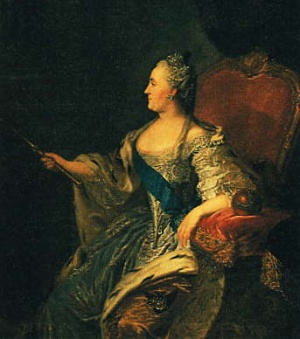 Catherine II, Empress of Russia 1762-1796, called the Mennonites as competent colonists (see Chortitza) into her recently acquired lands in the Ukraine. Catherine was born Sophie Friederike Auguste von Anhalt-Zerbst on 2 May 1729, daughter of Prince Christian August of Anhalt-Zerbst (1690-1747) and Johanna Elisabeth von Schleswig-Holstein-Gottorp (1712-1760). She married Karl Peter Ulrich, Duke of Holstein-Gottorp (1728-1762), grandson of Emperor Peter the Great of Russia and heir to Empress Elizabeth of Russia. He succeeded her and reigned as Peter III, Emperor of Russia for six months in 1762 until forced to abdicate in favor of his wife Catherine.

On 22 July 1763 she issued a manifesto guaranteeing to all German immigrants, regardless of creed, freedom of speech, schools, and religion; autonomous government of villages, communities, and colonist areas; and, above all, freedom from military service. By means of a special document signed by George von Trappe she invited the Mennonites in West Prussia to immigrate to Russia, promising them complete freedom "for all time," and 65 desiatinas (ca. 165 acres) of land for each family. On 7 August 1786 the document was read aloud at a public meeting at Danzig. In autumn of the same year Jakob Höppner and Johann Bartsch went to Russia as deputies of the Prussian Mennonites. They were ceremoniously received by the empress, who was on her journey to Taurida, and "out of special grace and favor" they had to accompany her to the Crimea. The empress remained friendly to the Mennonites throughout her life.

Catherine died 17 November 1796 and was succeeded by her son Paul I of Russia.

Thomson, Gladys Scott. Catherine the Great and the Expansion of Russia. New York, 1950.