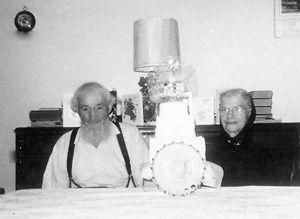 Harold and Christina Carter at the time of their 50th anniversary in 1969. Family photo

Harold William Carter: English orphan, farmer, carpenter, barn builder boss and lay leader in the Ontario Old Order Amish Church, was born 28 May 1898 in St. Mary’s Paddington, London, England to William Harold Carter and Julia Maria Butcher. Harold had four older sisters-Florence, Nellie, Miriam and Dorothy. In keeping with Anglican tradition, Harold was baptized as an infant. His mother died when he was one year old, and his father remarried. In December 1904 Harold’s father died and his stepmother placed the Carter children into a Barnardo Orphanage in London.

Five months later, six-year-old Harold and three of his sisters along with 160 other orphans and homeless children boarded the S.S. Bavarian and sailed for Canada. They landed in Montreal on 13 May 1905 and travelled by train to the Annie MacPherson House, 51 Avon Street, Stratford, Ontario. A Scottish evangelical Quaker, Annie MacPherson (1833-1904) founded a program called “Home Children” which, in cooperation with Thomas Barnardo, arranged for poor and orphaned English children to be relocated to Canada. Of the approximate 100,000 “home children” who came to Canada from Great Britain between 1883-1919, 8,000 were received by the Annie MacPherson House and dispersed to foster families throughout southern Ontario.

After almost nine months in the orphanage, Harold Carter became a foster child of Daniel (24 March 1871- 24 July 1952) and Fannie (Kuepfer) Jantzi (27 March 1870-7 June 1914) of Topping, Ontario. Many “Home Children” suffered exploitation in rural Ontario by farmers who used them as cheap labor. In contrast, the Jantzis provided Harold Carter with the necessities of life, love and belonging. Harold told his children, “She was just like a mom to me.”

Daniel Jantzi was a deacon in the Old Order Amish Church and Harold was immersed in the language, religion and culture of his adoptive community. Because he was never officially adopted by the Jantzis, he remained a crown ward and was required to stay in school two years longer than his Amish peers. One wonders how this contributed to the open mindedness and tolerance which earmarked his life.

At the age of 18 Harold Carter was baptized into the Old Order Amish Church. On 25 November 1919 he married Christina Kuepfer (26 August 1893-9 April 1981); they had four sons, William, Emmanuel, Joseph and Leroy, and one daughter, Ruth. For a few years Harold worked for fellow church member and entrepreneur, John R. Ebersol. In 1928 they bought Christina’s parent’s farm and farmed for the next 33 years.

Harold and Christina had a strong faith. When making a major decision, Harold would acknowledge Divine providence by adding, “Wann es der Herr sie Wille ist” (If it is God’s will). Harold was a good singer and served the congregation as a “Vorsänger” (song leader). As part of a provincial research project, Harold along with fellow Amish were recorded singing the slow Ausbund tunes (“langsum weis”) which are passed down from generation to generation.

As an indication of the respect which Harold had in his community, he was nominated for the lot more than once. Although he never drew the lot, two sons were ordained in the Amish Church.

In addition to farming, Harold developed skills as a carpenter and served as “the Boss” at barn raisings. He directed the raising of 34 barns plus sheds and houses, mostly in the Milverton area but also from Palmerston to Tavistock.

Harold’s congenial personality and leadership skills were recognized by his community which elected him as the chairperson of the Amish Mennonite Fire and Storm Aid Union from 1950-1969. Members from across the spectrum of Amish Mennonite churches worked together to practice mutual aid in the face of fire and storm losses. With such diversity in its membership, it is no surprise that the Aid Union struggled to stay united. For example, tensions arose when the more progressive Amish Mennonite congregations sought coverage for their increasingly elaborate meetinghouses. When it appeared that the majority would vote down the inclusion of meetinghouses, historian Orland Gingerich said, “Harold Carter, himself an Old Order member, remarked that since they meet in homes and barns, which are insured, he thought it only fair that meeting houses (church buildings) also be insured.” Coverage was extended. With constant innovations in agriculture and the increased acculturation of more liberal members, some Old Order Amish lobbied to withdraw from the Aid Union and form their own organization. Orland Gingerich credited “the vision, patience, and skillful leadership of Harold Carter” in helping the Aid Union navigate these changes and remain intact.

On 26 October 1972 Harold Carter died at the age of 74. Christina died 9 April 1981. They are buried in the Edgecombe Amish Cemetery, west of Newton, Ontario.

In contrast to the losses and deprivation of his early life in England, Harold finished his course in comfort and contentment—the patriarch of a large, caring family and a respected member of his adopted church and community. Harold Carter left a legacy of leadership in barn raisings, mutual aid and resilience in the face of human hardship.