From GAMEO
Revision as of 22:34, 13 October 2022 by SamSteiner (talk | contribs) (→‎Additional Information: added line to table)
(diff) ← Older revision | Latest revision (diff) | Newer revision → (diff)
Jump to navigation Jump to search
A checked version of this page, approved on 13 October 2022, was based on this revision. 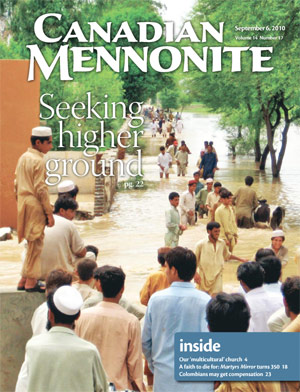 The first issue of Canadian Mennonite magazine appeared on 15 September 1997, published in Waterloo, Ontario. The mission statement read: "Published bi-weekly by Mennonite Publishing Service, Canadian Mennonite aims to reflect and upbuild the life and work of the Mennonite church in Canada. The primary constituency for Canadian Mennonite is the people and churches of the Conference of Mennonites in Canada and its five related area conferences." The magazine, designed by Glenn Fretz, was printed on newsprint in an 8¼ by 10½ inch format, with a full-color cover and spot color inside.

Canadian Mennonite was really a "transformation" of the Mennonite Reporter which had served Canadian Mennonites since 1971. The magazine format symbolized a shift in focus and "ownership" of the previous periodical, a shift from an independent, inter-Mennonite news tabloid to a periodical for the Conference of Mennonites in Canada. What did not change was the publisher – the independently incorporated Mennonite Publishing Service, and the editors: Ron Rempel as editor/manager and Margaret Loewen Reimer as associate and later managing editor.

Although the Conference of Mennonites in Canada (CMC) had used the Mennonite Reporter for its communication needs, buying regular supplements and subsidizing subscriptions for members, CMC wanted its own periodical. By the mid-1990s, change was underway, fueled by dormant subscription levels for Mennonite Reporter, the CMC desire for a more effective communications vehicle, and the move toward integration between CMC and Mennonite Church bodies in Ontario. (Full integration occurred with the birth of Mennonite Church Canada in 2000.) Mennonite Reporter subscriptions stood at around 10,000, with over 90 percent coming from the integrating groups. A task force explored how the Mennonite Reporter might be transformed to make it more widely distributed in the groups where it already had the widest readership. A cross-Canada consultation called for a magazine format and more inspirational faith articles.

In 1997, with the birth of Canadian Mennonite, CMC delegates approved a cost-sharing formula with Mennonite Publishing Service that funded subscriptions for every CMC household. This initiative raised circulation to 17,000. (Subscriptions dropped off somewhat as CMC members exercised their option not to receive the magazine.) The conference also increased its representation on the publishing board. Founding chair of the new board was Sam Steiner. The editorial in the inaugural issue of Canadian Mennonite noted the consultation’s call by "adding more inspirational and faith reflection articles to Mennonite Reporter’s traditionally strong emphasis on news and discussion of issues." Also added were announcements of births, baptisms, marriages and deaths.

The 16 February 1998 issue included a new mission statement: "Canadian Mennonite is a bi-weekly Anabaptist/Mennonite periodical which seeks to promote covenantal relationships within the church (Hebrews 10:23-25). It provides channels for sharing accurate and fair information, faith profiles, inspirational /educational materials, news and analysis of issues facing the church." The full statement adopted by the Mennonite Publishing Service included the following: "Editorial freedom is expressed through seeking and speaking the truth in love and by providing a balance of perspectives in news and commentary. Canadian Mennonite will be a vehicle through which mutual accountability can be exercised within the community of believers; the paper also encourages its readers to have open hearts and minds in the process of discerning God’s will." In August 2003, the publisher changed its name to Canadian Mennonite Publishing Service.

Ron Rempel ended his role as editor/publisher with the 4 August 2003 issue. Margaret Loewen Reimer stepped in as interim editor/publisher for 2003-04. Timothy Miller Dyck served as editor/publisher from August 2004 to March 2009. Dyck focused on listening to the concerns of congregations and trying to shape the magazine accordingly. Loewen Reimer retired from Canadian Mennonite in January 2005, to be succeeded by Ross Muir as managing editor. For its tenth anniversary, the 3 September 2007 issue sported a new design, with more color and changes in typeface and layout. The magazine is a member of The Canadian Church Press, from which it has received many awards over the years.

Dick Benner, an experienced journalist from the United States, became editor/publisher of Canadian Mennonite with the 30 March 2009 issue and remained in that position in 2011. The 2011 mission statement read: "To educate, inspire, inform, and foster dialogue on issues facing Mennonite Church Canada as it shares the good news of Jesus Christ from an Anabaptist perspective. We do this through a regular publication and other media, working with our church partners." It is noted that "Area churches and MC Canada financially support 44 percent of Canadian Mennonite’s annual budget." Circulation at the end of 2011 was 13,840.